In the second half of David Brooks column, he asserts that Huckabee’s win last night could foreshadow a fundamental change in the party. While unlikely that Huckabee will make it to the convention, Brooks feels that Huckabee breathed new life into the Religious Right. Brooks: 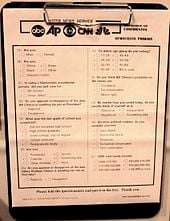