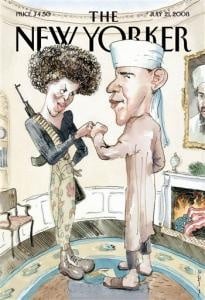 Now that we’ve all recovered from the shirtless Mormon, what do people think of the New Yorker cover? I personally find it a bit tasteless, but I see what they were going for. That doesn’t mean I have to like it.

From the Obama campaign: “The New Yorker may think … that their cover is a satirical lampoon of the caricature Sen. Obama’s right-wing critics have tried to create. But most readers will see it as tasteless and offensive. And we agree.”

I’d like to open this up to discussion. What do you think?