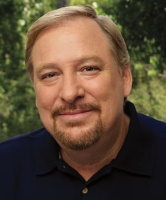 In August, it was megachurch leader Rick Warren with then-presidential candidates Barack Obama and John McCain.

Three and a half months later, on World AIDS Day, the best-selling author will host a forum on global health with two other big names in politics: President George W. Bush and first lady Laura Bush.

On Monday (Dec. 1) at the Newseum in Washington, Warren is scheduled to lead a conversation with the first couple about HIV/AIDS, malaria and tuberculosis.

During the forum, President-elect Barack Obama is scheduled to provide a videotaped message about the future of global health.

Warren plans to give President Bush a medal to recognize the president’s efforts to fight global disease, including through the President’s Emergency Plan for AIDS Relief, whose effect the pastor has seen in his global travels.

“I hope that this forum will show the American people that our global health programs represent more than compassionate humanitarian efforts, but are also a strong, prudent pillar of American foreign policy,” Warren said in a statement announcing the forum.

The forum marks the third time Warren has held a “Saddleback Civil Forum.” The first, held in the spring of this year, featured Holocaust survivors.