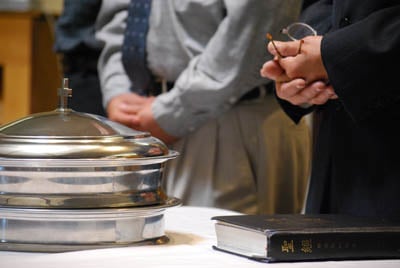 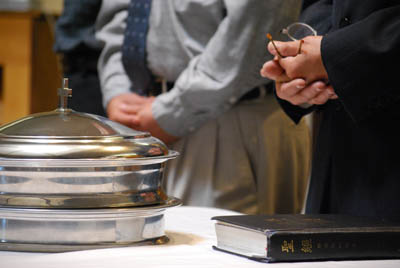 BOULDER, Colo. -- The baptismal pool at the Boulder Chinese Baptist Church was filled with water as a small woman dressed in a white robe, inched down the stairs.

"This is Sister Wang Shuang," Pastor William Fu, a Taiwan native, said in Mandarin to his mostly mainland congregation. "She came to our church last September from Chicago. Thanks for God's grace, she is willing to become his child."

Clutched in the pastor's arms, Wang was immersed in the water. Applause arose from the audience as they sang, "What a joyful day. Oh God, please wash away my sins."

It was a moment Wang had never anticipated when she first arrived in the U.S. six years ago from her native Guangxi province, where generations had been immersed in the official government gospel of atheism.

"In two days, I will have my 29th birthday," she said in her testimony, "but I got reborn today."

In the three decades since the end of the Cultural Revolution, during which houses of worship were destroyed and missionary workers expelled, there has been a surge in Chinese students and scholars like Wang adopting Christianity in the U.S., says Purdue University professor Fenggang Yang.

Wang's Boulder Chinese Baptist Church (BCBC) is one of about 1,000 Chinese churches scattered across the U.S., by Yang's estimate. The Southern Baptist-affiliated congregation only has between 50 and 55 registered members, and nearly all came from mainland China. Most are computer engineers in their 30s and 40s, and Pastor Fu notes that 11 have Ph.D.'s and 29 have master's degrees.

To be sure, Christian groups have been proselytizing to all varieties of international students on college campuses, but according to Yang, Chinese students are some of the most receptive.

At the University of Colorado's Boulder campus, incoming students have their first contact with Christianity the moment they land at Denver International Airport.

Fu's church acquires a list of the students -- with names, flight schedules, e-mails, phone numbers and home addresses -- from the university's Chinese Students and Scholars Association (CSSA). After picking them up at the airport, church members take them grocery shopping, buy them their first meal, and sometimes lend them their cell phones so students may call families in China.

Yin Jing, a doctoral student in physics and president of the CSSA at Boulder, said having church members pick up students may not be ideal, but students lack the time -- and the cars -- to do the job themselves.

Most students are grateful for the Christians' assistance, but not all feel at ease with it. Ye Yu is a doctoral candidate in geophysics who came to the U.S. in 2006. He was picked up at the airport by BCBC members and was provided temporary housing.

"My friend and I spent several days at Aunty Yan's house," Ye said, using the Chinese courtesy title for an elderly woman. At dinner on the second day, Yan and her husband, both Christians, led the students in prayer. Ye admitted he wasn't very comfortable with it but felt he had to do it to show his gratitude.

"They all prayed and thanked God. So it was my turn. I said I thank Aunty Yan for helping us and feeding us dinner. Her husband immediately corrected me and said, `You shouldn't thank us; you should thank God.' I thought that was strange."

After they settle down, church members invite students to their houses for welcome parties, and ferry them to Friday night fellowship, which entails a free dinner, hymn singing and Bible studies.

The decision to adopt a new faith varies from person to person, but observers say many Chinese conversion stories typically involve some sort of personal crisis -- a failed marriage, domestic conflict, self doubt or fear of death.

Yang said the rapid rate of Chinese student conversions can't be fully explained by individual crises, nor by successful evangelism efforts, but rather by the modernization in China that is pushing many Chinese toward seeking a new system of meaning.

"China is undergoing rapid and dramatic social changes that have brought (social unrest), and Christianity provides a spiritual and moral framework to put things in personal life and larger society in order," Yang said.

But in a search for meaning, why not choose a more traditional Eastern religion, such as Buddhism or Taoism? For one, Christianity is easier to find in the U.S. than a Buddhist or Taoist temple, and Yan Yushu, a master's student at Boulder's East Asian and Civilization program, thinks that most Chinese students are simply ignorant about their native religions.

"In China, we don't get to study anything about Buddhism or Taoism," she said. "We are taught that those are feudalist superstitions."

Perhaps more than anything, the main reason students are opting for Christianity is the same one that has attracted immigrants of all stripes for generations: a place where they can find company, speak their native language, and in some cases, get free food.

"Some students stop coming after a while because they were like, `We can't eat the free dinner without converting.' But my skin is thick," said Ye Yu, the geophysics student.

Church members, meanwhile, admit they don't always see the fruit of their labors, but like every missionary effort, they're content to simply live with the effort.

"A lot of the time we are just sowing seeds," said Zhan Min, a BCBC member. "We planted the seeds in their heart, and you never know when they might sprout."

Related Posts
By Amy Klein
What good is faith when your fertility treatments aren't working?
By Alejandra Molina
‘Your fight is my fight’: Latino clergy and faith leaders rally behind Black Lives Matter
By Alejandra Molina
Who is Junipero Serra and why are California protesters toppling statues of this saint?
By David Crary
Amid pandemic, scores of US Catholic schools face closure
By Alejandra Molina
On LA’s Skid Row, Catholic Worker’s ‘Hippie Kitchen’ adjusts to COVID-19