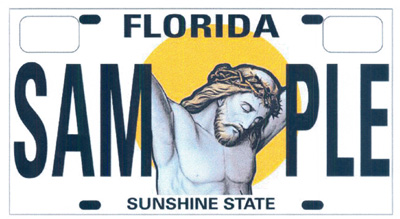 (RNS1-MAY04) A move to create specialized license plates in Florida that featured a crucified Christ failed to gather support before the close of the regular legislative session. For use with RNS-DIGEST-MAY04, transmitted May 4, 2009. Religion News Service photo courtesy Americans United for Separation of Church and State.

(RNS) Moves to create two Florida license plates with images of a crucified Jesus on one, and a stained glass window and cross on another, have died in the Florida legislature.

Both plates had come under blistering criticism from Americans United for Separation of Church and State and the American Civil Liberties Union. The Associated Press reported that bills to create the plates died at the end of the regular legislative session on Friday (May 1).

State Sen. Gary Siplin, an Orlando Democrat, had proposed the plate with "a picture of my Lord and Savior Jesus Christ." The plate portrayed an image of Jesus' head lowered under the weight of a crown of thorns.

Gov. Charlie Crist, a Republican, had earlier said he would support the plate. "If they (critics) don't want one, they don't have to buy one," Crist told The St. Petersburg Times.

Florida drivers are able to purchase more than 100 specialized license plates. Proceeds, which normally run between $15 and $25, support various causes and groups.

The other plate, proposed by state Sen. Ronda Storms, a Republican from Brandon, would have depicted a stained glass window, cross and the words "I Believe." A district court has temporarily halted the production of similar plates in South Carolina.

"License plates are not a license for the government to prefer one religion over others," said the Rev. Barry Lynn, executive director of the Washington-based Americans United. "I'm glad the legislature in Florida seems to have finally realized that."

Related Posts
By Alejandra Molina
‘Your fight is my fight’: Latino clergy and faith leaders rally behind Black Lives Matter
By Alejandra Molina
Who is Junipero Serra and why are California protesters toppling statues of this saint?
By David Crary
Amid pandemic, scores of US Catholic schools face closure
By Alejandra Molina
On LA’s Skid Row, Catholic Worker’s ‘Hippie Kitchen’ adjusts to COVID-19
By Bill Baker
A conversation with Father James Martin: 'Why did God let this happen?'