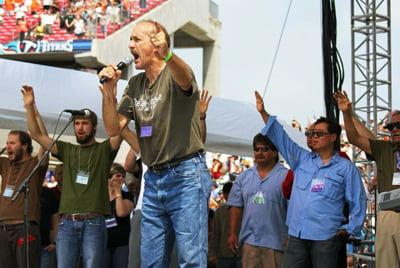 (RNS1-SEP01) Lou Engle, seen here leading TheCall rally in Nashville, is a leading proponent of the New Apostolic Reformation, which advocates for Christians to “reclaim the seven mountains of culture.” For use with RNS-5FACTS-DOMINION, transmitted Sept. 1, 2011. RNS photo courtesy Eden Frangipane.

(RNS) In recent weeks, an arcane and scary-sounding religious term has crept into the lexicon of the 2012 campaign, tripping from the tongue of everyone from MSNBC broadcaster Rachel Maddow to conservative Christian leader Ralph Reed.

Depending on whom you ask, “Dominionism” either signifies a Christian plot for world domination, or the latest liberal bugaboo.

Here are five facts about Dominionism to help you decide for yourself:

The term “Dominionism” was popularized in the 1990s by scholars and journalists, who applied it to conservative Christians seeking political power. It derives from the Book of Genesis, in which God tells Adam and Eve to have “dominion” over the Earth and its animals. “Dominionism” generally describes the belief that Christians are biblically mandated to control all earthly institutions until the second coming of Jesus.

Experts identify two main schools of Dominionism: Christian Reconstructionists, who believe biblical law, including stoning as punishment for adultery and other transgressions, should replace secular law; and the New Apostolic Reformation, which advocates for Christians to “reclaim the seven mountains of culture”: government, religion, media, family, business, education, and arts and entertainment.

Very few Christians identify themselves as “Dominionists.” But experts say the New Apostolic Reformation has gained traction among charismatic Christians and Pentecostals under the influence of C. Peter Wagner, a church-growth guru and prolific author. Prominent “apostles” in the NAR include Lou Engle, co-founder of TheCall assemblies and Mike Bickle, director of the International House of Prayer in Kansas City, Mo.

Experts say the New Apostolic Reformation has chapters of “prayer warriors” in all 50 states and in foreign countries where Pentecostalism and charismatic Christianity are popular. Membership numbers are difficult to ascertain, however, since adherents are not required to officially join any church, seminary, or ministry.

Some experts say Dominionism is more a school of thought than a social group. Its influence can be seen in textbooks that portray the Founding Fathers as devout evangelicals, in an anti-gay bill in Uganda and in the home-schooling movement, they say. Evangelical experts, however, say they see no evidence of Dominionist thought among conservative Christian elites.

When did Dominionism arise?

Christian Reconstructionism is the brainchild of the R.J. Rushdoony, a Calvinist theologian who died in 2001, leaving behind several dense tomes and a small band of followers. The New Apostolic Reformation traces its roots to several Pentecostal movements that proliferated in the second half of the 20th century.

Why are people talking about Dominionism now?

The topic has bobbed up almost every four years since evangelical broadcaster Pat Robertson, who has espoused Dominionist ideas, ran for president in 1988. During the 2008 election, for instance, a video surfaced of a pastor active in the New Apostolic Reformation praying over Sarah Palin, raising questions about her involvement with the group.

In August, several pastors affiliated with NAR helped organize and delivered speeches at Texas Gov. Rick Perry’s prayer rally in Houston. Perry is expected to need strong support from conservative Christians in his run for the presidency, as is Minnesota Congresswoman Michele Bachmann, who has expressed admiration for writers accused of being Dominionists.

Many conservative Christians dismiss the attention on Dominionism as liberal fearmongering. They wish to participate in American culture, they say, not dominate it.