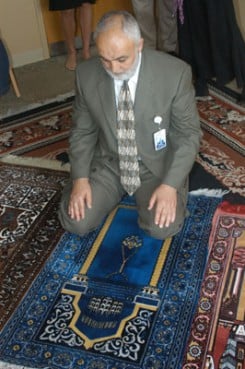 (RNS) Dr. Syed Malik is a devoted Muslim who tries, and mostly succeeds, to pray five times per day, as demanded by his Islamic faith.

He is also an accomplished general surgeon in Orlando, Fla., who does complex operations that can last hours.

Malik, 66, would never leave an operating table to pray. Instead, when surgery and prayer times conflict, he performs prayers before surgery or makes them up after.

“I don’t care if this goes against what some scholars say, I feel very comfortable with how I approach prayers,” said Malik.

In fact, Islamic scholars generally agree that while prayers command high priority, they can be missed or performed later in extenuating circumstances.

While Muslims differ about what constitutes extenuating circumstances, many successfully integrate prayer into their workday, often with help from their employers.

This month (October), Hertz fired 25 Somali Muslim drivers at the Seattle-Tacoma International Airport who refused to sign an agreement pledging to clock out during prayer breaks.

The workers’ union is challenging Hertz. But some Islamic scholars say that the rental car company offered the workers a solution compatible with their Islamic beliefs.

“Employers have the right to protect themselves. Unfortunately, there are Muslims who abuse the system,” said Imam Yahya Hendi, president of Clergy Without Borders, an interfaith organization in Washington, D.C.

Hendi said that it was un-Islamic to accept pay for work one did not perform, and chastised the fired Hertz workers for making Islam seem “complicated” and “inadaptable to America.”

“If Muslims can do it on their own time, this is the idea,” said Zulfiqar Ali Shah, executive director of the North American Fiqh Council, a group of religious leaders who offer guidance on Islamic law.

“If there’s a conflict between prayer and work, the Muslims should accommodate to work,” said Shah.

To emphasize that point, Muslims point to a hadith, or story, about Prophet Muhammad in which he prayed the midday and afternoon prayers together.

Most scholars recognize the exception, but caution that it should be used judiciously, and not just to avoid uncomfortable situations.

“Would you step out of a meeting to use the bathroom or take a call from your son? Then why not take a few minutes to be with God?” said Hossam Al Jabri, an imam in Boston and former executive director of the Muslim American Society, an advocacy group.

“Being a little inconvenienced for the sake of God is not such a bad thing.”

Most Muslims can complete their prayers in three to five minutes, although pre-prayer ablutions, or ritual washing, can take almost as long.

For each of the five prayers – pre-dawn, noon, afternoon, sunset, and night — Muslims have a few hours to make them, although some say prayers are best when made early. These times change throughout the year as the length of the days varies.

Many Muslims find that employers are happy to accommodate their prayer needs.

In his 20 years with the same company in Los Angeles, IT Manager Soheil Naimi has seen supervisors come and go, but none ever prevented him from praying.

In fact, Naimi’s prayer space has improved as he’s been promoted. When he started, he had no office and used to pray in open conference rooms.

He later received a cubicle that was big enough to pray in, but was often interrupted by co-workers, who he tuned out while praying.

“I don’t think I offended anyone,” said Naimi, who asked that his company not be named. He now has his own office, so praying is easy. The only time performing prayers can be hard is when he’s out of the office, said Naimi, who has prayed in his car, in a bathroom, and has occasionally missed prayer altogether.

Kelly Kaufmann, a program manager at a Chicago health insurance company, keeps a prayer rug in a Macy’s tote bag at her office, and reserves one of her company’s many meeting rooms twice daily for 30 minutes. Kaufmann, who also asked that her company not be named, text messages Muslim co-workers to let them know when she has a room reserved.

“I am lucky that I make my own schedule and control when my meetings are, and can simply come to work earlier or stay later if needed to ensure the time taken to pray does not interfere with the amount of work I wanted to accomplish during the day,” Kaufmann said.