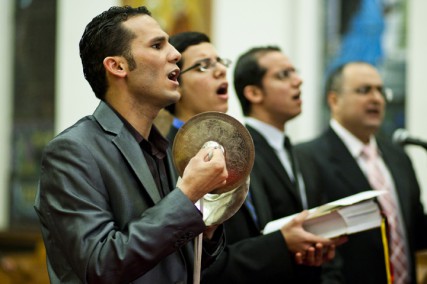 CAIRO (RNS) From her home, Samia Ramsis holds a key chain bearing the face of the Virgin Mary as visitors outside come to look upon the spot where Egypt's Coptic Christians believe Mary, Joseph and the infant Jesus found refuge after fleeing Bethlehem.

Once crowded with Christians, Cairo's Coptic quarter where she lives with her husband, Mounir, and two children is now home to fewer than 50 Christian families.

“We know many Christians have left,” said Mounir Ramsis, speaking not only about this quarter but about all of Egypt. “But we love this country and will stay until death.”

The Arab Spring uprisings that toppled secular dictatorships have unleashed long-suppressed freedoms that have allowed Islamic parties to gain a share of political power they have been denied for decades. Their rise is creating near-panic among ancient Christian communities that dot the Muslim world and predate Islam by centuries.

In Tunisia, where the regime of President Zine El Abidine Ben Ali was ousted last year after 32 years in power, the dominant political party, Ennahda, has worried some of Tunis' 22,000 Catholics by vowing to tilt the country's yet-to-be-written constitution toward Shariah, or Islamic law.

In Libya, Christians are uneasy as the powerful head of the Tripoli Military Council, Abdul Hakim Belhaj, who once led an Islamic militia with links to al-Qaida, has said he plans to run for office in elections scheduled for April.

In Afghanistan, no new building permits have been issued for churches, and the last church open to the public was demolished over the summer. In Iraq, the Christian community has decreased by two-thirds since 2003 amid bombings of churches and assassinations of priests.

And Christians in Syria, where Muslims have risen up against President Bashar Assad, have been subjected to murder, rape and kidnappings in Damascus and rebellious towns, according to Christian rights groups, including Open Doors, which helps Christians facing persecution.

Many had hoped for better in an Arab movement that proponents said was about replacing tyrannies with democracies.

“If the current trajectory continues, it's reasonable to think that within a generation these (Christian) communities will not look like functioning communities,” Eibner said. “They'll look more like the once-flourishing Jewish communities” across the Arab world that are all but gone.

Nowhere is the irony more profound than in Egypt, where an estimated 8 million Christians live with more than 70 million Muslims.

Christians demonstrated alongside Muslims early last year to oust Hosni Mubarak. Before Mubarak's overthrow, Christians had suffered from years of church burnings and murders at the hands of radical Muslims who want an Islamic state free of religious minorities. After the ouster, the military regime that has been running the country has refused to make any arrests in attacks on Christians.

Mina Bouls, 25, a Copt who fled to Philadelphia, recalls cowering with his mother in 1997 as a mob stoned the family home and chanted anti-Christian slogans. But the difference then was that Mubarak ordered the military to protect Christian communities and jailed extremists, Bouls said.

In October, Copts organized a protest in downtown Cairo over the authorities' failure to investigate attacks, including the bombing of a church in Alexandria on New Year's Day 2011 that killed 20 people. The military attacked the demonstrators and 17 Christians were run down and killed by military vehicles, according to Human Rights Watch.

Bouls wants to bring his family to the U.S. because he says he is petrified by the new society forming in Egypt. The first free elections in decades held in the past two months handed power not to moderates but to members of the Muslim Brotherhood and radical Salafi candidates, who combined took nearly 70 percent of seats.

“If people try to rule the country with the Quran, with Shariah law, that means they look to us as second-class people,” Bouls said.

Christianity has existed in Egypt since the second century. The Muslim Brotherhood, a political movement that seeks a nation run according to Quranic law, has said Egypt would respect the rights of religious minorities.

The Salafis, Muslim fundamentalists who want a complete application of Shariah law that generally denies equal rights to women and religious minorities, also say Copts are safe in Egypt.

“Even if there are Salafi leaders who proclaim Copts to be heretics, this does not mean that (the Copts) must be subjected to any religious or (legal) sanctions,” said Emad Abdel-Ghafour, head of the al-Nour party that won 25 percent so far in parliamentary elections.

Abanob Magdi lives near Egypt's largest pyramid and says he is not optimistic about what lies ahead.

“I saw on TV the other day a Salafi saying that if they get in power, beaches will be divided for men and women and women will have to be veiled,” Magdi said as he walked through Coptic Cairo with friends.

Christians account for 4 percent of the people of the Middle East and North Africa. Despite being the birthplace of Christianity, the region now has the fewest number of Christians (13 million) and the smallest share of its population that is Christian of any other major geographic region, according to the Pew Forum on Religion & Public Life.

The future of minorities in the emerging democracies of the Middle East “is a huge issue most vividly seen in Egypt and the Copts,” said California Rep. Howard Berman, ranking Democrat on the House Foreign Affairs Committee. “It's on our agenda as we figure out how to help these countries,” and their treatment of Christians and other minorities is a “red line” that will affect future aid.