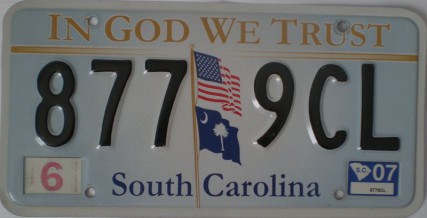 Plate Politics: drivers in South Carolina can now buy an “I Believe” Christian license plate as well as a pro-Gay Rights plate. Still no word on whether either cause will expand to mud flaps.

You can now see how the rest of the world sees American Christians…in humorous infographic form! Is it accurate? Is one of them you? Let us know!

OMG: A Muslim man in Canada is facing a terror probe after he sent a text message to co-workers telling them to “blow away” the competition at a New York trade show. Insert your favorite George Orwell joke here.

Not a fan of the Virgin of Guadalupe? Well maybe she'll grow on you: a botanical version of the Catholic icon is apparently attracting attention in Houston, TX.

Finally, your Video of the Day is the story of Jonah and the Whale, told in the most adorable-est way possible.