WASHINGTON (RNS) The founders of the Republican Party saw Mormons as their enemies. And the first Mormon leaders didn't have much nice to say about the GOP, either.

You would never know it now — one recent poll showed three-quarters of Mormon faithful lean toward the GOP — but the two groups had an acrimonious start, fueled largely by the early Mormon practice of polygamy. 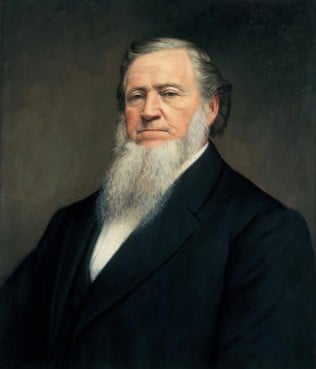 LDS Church President Brigham Young encouraged Mormons to vote for Democrats, in part because the Republicans were vehemently anti-polygamy.

As Mitt Romney presses his bid for the Republican nomination for president, many Americans don't realize how his Mormon faith played an important role as foil in the early days of the GOP — and how its first candidates catapulted to power in part by whipping up anti-Mormon sentiments.

“If you like irony, you've got to love history,” says Utah historian Will Bagley. “Polygamy made Mormons into a national punching bag during the 1850s.”

The Republican Party launched in 1854 as an anti-slavery party and quickly seized on growing concern with Mormons in the Utah Territory taking on multiple wives.

The GOP's first party platform in 1856 took direct aim at polygamy, placing it in the same sinister frame as slavery in the hope of cultivating the votes of Christians wary of the spread of these dual threats to the republic.

“It is both the right and the imperative duty of Congress to prohibit in the Territories those twin relics of barbarism — polygamy, and slavery,” the party declared as it emerged on the national stage for the first time.

Later on, Republicans used their congressional power to wipe away any secular power Mormon leaders had in the Utah Territory, and were the main backers of a law that disincorporated the Church of Jesus Christ of Latter-day Saints.

LDS church leaders, for their part, harbored ill will toward the Republican Party, urging followers to back the Democrats.

“We call upon you to stand firm to the principles of our religion in the coming contest for president,” read a letter from LDS church President Brigham Young and other leaders as published in the abolitionist newspaper, The National Era, on Nov. 20, 1856.

“Our duty is plain. There are two principal parties in the country — one is for us, the other against us.”

The relationship between Mormons and Republicans eventually flipped, morphing into the current-day landslide of LDS support for the conservative party. But things got a lot worse in the relationship before they got better.

In an 1890 letter to the Historical Society of California, San Francisco lawyer John W. Wills claimed credit for coining the phrase “twin relics of barbarism” in reference to polygamy and slavery. 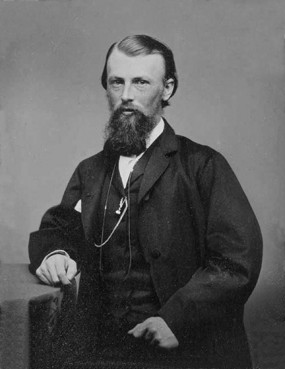 John W. Wills claimed credit for coining the phrase “twin relics of barbarism” in reference to polygamy and slavery.

Wills said there was some hesitancy by a few GOP delegates to pair the two institutions, in part because some felt that slavery already included the practice of polygamy. But Wills kept the language intact.

“The rapturous enthusiasm with which the resolution was received by the convention,” Wills wrote, “was the first convincing evidence that the committee had acted wisely in determining to preserve it in its original form.”

Sen. Stephen Douglas, an Illinois Democrat, said in an 1857 campaign speech that he feared Mormons wanted statehood for Utah so they could use it as an “invincible shield” to protect their “crime, debauchery and infamy.” 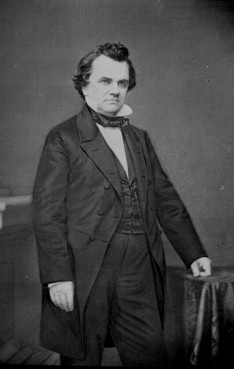 Sen. Stephen Douglas said in an 1857 campaign speech that he feared Mormons wanted statehood for Utah so they could use it as an “invisible shield.”

After Republican Abraham Lincoln won the White House in 1860 and the Civil War ended slavery, the GOP soon found that polygamy was one concern that still resonated with Americans.

Over the next several decades, Republicans targeted the LDS church over polygamy and suspicion that Mormons were attempting to form their own sovereign country in the Mountain West.

Rep. Justin Smith Morrill, a Whig Party member-turned-Republican from Vermont (where, ironically, LDS church founder Joseph Smith was born), sponsored the 1862 Morrill Anti-Bigamy Act, which banned polygamy and limited ownership in any territory by a church or nonprofit to not more than $100,000. 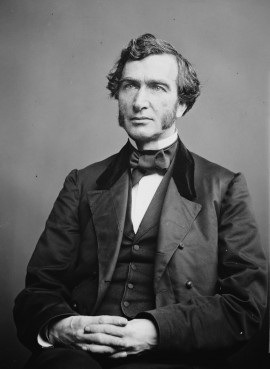 Rep. Justin Smith Morrill was a Whig Party-member-turned-Republican from Vermont.

Vermont Rep. Luke P. Poland later amended that law to order that all civil and criminal cases in the Utah Territory be handled by federal courts, fearful that state courts were simply church puppets.

Poland hoped the federal courts would then go after polygamists, but it wasn't until the 1887 Edmunds Anti-Polygamy Act — sponsored by Republican George Franklin Edmunds — and the subsequent Edmunds-Tucker Act that Mormons with plural wives were prosecuted.

Around 1,300 men were eventually jailed under that act.

The law also was successful in disincorporating the LDS Church, forcing Mormons to take their battle to court. The U.S. Supreme Court later ruled against the faith, but Congress backed down when Mormon leaders issued a proclamation in 1890 banning polygamy.

Mormon leaders, upset with the Democrats' inaction on the long-sought establishment of statehood for Utah, looked to the GOP for help. The Republican Party of Utah was founded on May 20, 1891.

“Because of members' previous clashes with the national Republican Party, many church leaders feared that most of the Saints would flock to the Democratic Party and in doing so alienate Republican friends who were working diligently for statehood,” according to the Encyclopedia of Latter-day Saint History. “Therefore, several general authorities used their influence both publicly and privately to encourage members to affiliate with the Republicans.”

Utah finally gained statehood in 1896, though it would take decades longer for the Mormon faith to evolve into a Republican-leaning group.

The modern GOP's take on social issues, such as abortion, the Equal Rights Amendment and gay marriage, drew Mormons into the conservative fold beginning in the 1970s.

Ezra Taft Benson, who led the church from 1985 to 1994, had supported the right-wing John Birch Society and served as Agriculture secretary under President Eisenhower, and helped further push his fellow Mormons into the conservative camp.

A report by the Pew Forum on Religion and Public Life in January showed that about 74 percent of Mormons lean toward the Republican Party, and 66 percent of them call themselves conservative.