(RNS) Radio evangelist Harold Camping has called his erroneous prediction that the world would end last May 21 an “incorrect and sinful statement” and said his ministry is out of the prediction business. 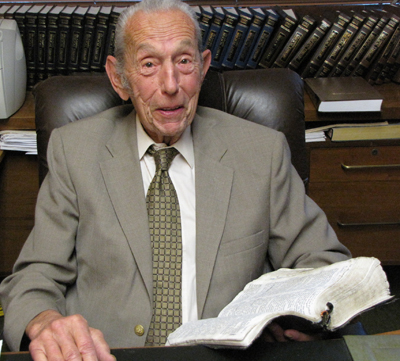 (RNS) California radio evangelist Harold Camping said the world will end on May 21, 2011 — a figure he based, in part, on when he believes Noah entered the ark. RNS file photo by Kimberly Winston.

“We have learned the very painful lesson that all of creation is in God's hands and he will end time in his time, not ours!” reads the statement signed by Camping and his staff and posted on his ministry's website.

“We humbly recognize that God may not tell his people the date when Christ will return, any more than he tells anyone the date they will die physically.”

The “March 2012” letter, which included multiple mea culpas, was released with a note from the board of California-based Family Radio. The group intended to mail it to listeners first, but immediately posted it “to avoid confusion” after it was leaked online.

Camping said people have continued to wish for another prediction, but he is now convinced that critics were correct about the biblical admonition that “of that day and hour knoweth no man.”

“We must also openly acknowledge that we have no new evidence pointing to another date for the end of the world,” he wrote. “Though many dates are circulating, Family Radio has no interest in even considering another date.”

The letter makes no reference to Camping's explanation last year that he had miscalculated by five months and the world would instead end on Oct. 21, 2011.

The dual predictions landed Camping in the No. 7 spot of the Religion Newswriters Association's list of the top 10 religion stories of 2011.

News
For Latter-day Saints like Andy Reid of Kansas City Chiefs, football and faith go hand in hand
Follow us on Facebook!
Submit your photos to RNS