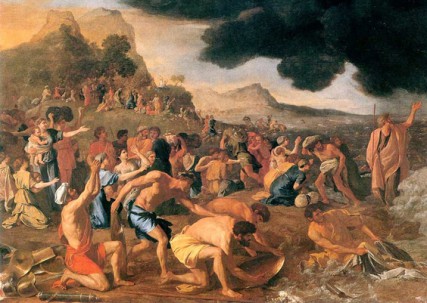 Jews have been on the move ever since crossing the Red Sea during the Exodus from Egypt (seen here in a painting by Nicolas Poussin circa 1634).

WASHINGTON (RNS) Ever since their mad dash out of Egypt bound for the Promised Land, Jews have been on the move — and they continue to be, far more than any other religious group, according to a new study.

One in four of the world’s Jews has migrated from one country to another, compared to 5 percent of Christians and 4 percent of Muslims who have left their native lands.

The findings are part of a comprehensive new study on religion and global migration, released Thursday (March 8) by the Pew Forum on Religion & Public Life, which tracked the journeys of the world’s 214 million migrants.

“The world Jewish community is consolidating,” said Jonathan Sarna, a professor of American Jewish history at Brandeis University who did not work on the study. “Jews are abandoning Third World countries where historically they had been persecuted and moving to large and generally free First World countries.”

No other major religious group approached the 25 percent migration rate of the Jews, said Phillip Connor, the senior researcher on the study. On average, he said, only 3 percent of the world’s population migrates.

What may be surprising to people, Connor said, is that overwhelmingly “people do stay put.”

As for the Jews, Sarna said, the vast majority of world Jewry lives in one of two countries. Of the 13.3 million Jews worldwide, 43 percent live in Israel and 39 percent live in the United States.

A major driver of Jewish migration: the establishment of Israel in 1948 and continued migration to that country. Sarna also noted the exodus of hundreds of thousands of Jews from the former Soviet Union for destinations in Israel, the U.S. and elsewhere.

A positive spin on Jewish migratory trends is that Jews, so often persecuted in their homelands, are safer in their new countries.

But “what we’re losing is one of the great themes of Jewish history,” said Sarna, referring to the collapse of Jewish communities in the Middle East, North Africa and other lands where they had lived for millennia.

Though Jews claim the most dramatic migration rates, their small numbers mean that the vast majority of migrants belong to other religious groups. Christians make up nearly half of all international migrants (49 percent) according to the study, though they make up a third of the world’s population.

Of all Christians alive today, 106 million have switched countries, and their top destination is the United States.

Of the 43 million foreign-born people living in the United States in 2010, an estimated 74 percent are Christian, according to the study’s authors, who combed census data and other studies to compile their findings.

Where are these immigrants coming from?

Mexico, a largely Catholic country, is the biggest “donor” nation of Christians to the U.S., with 12 million Mexican immigrants — both documented and undocumented — making their home north of the border.

As for other trends in migration to the United States, this nation is:

— The No. 1 destination for Buddhists. About 1.7 million foreign-born Buddhists live in the United States, many of them from Vietnam.

— The top stop for immigrants with no religion, about 4.4 million people, many of who come from China.

— Second after India for its number of Hindu migrants, who number 1.3 million in the U.S.

Among Muslims, the U.S. ranks seventh as a destination, after Saudi Arabia, Russia, Germany, France, Jordan and Pakistan. There are about 2 million Muslim immigrants now living in United States, according to the study.