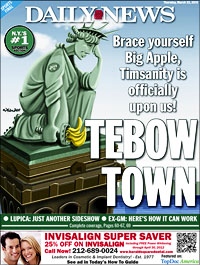 “Times Square Tim” Tebow is traded to New York. So Jesus is a Jets fan now. (When He’s not busy rooting for Jeremy Lin and the Knicks, which He seems to be doing a lot of late.)

Let the “Timsanity” begin. But Tebow is hardly the first big name believer in New York.

Still, will Gomorrah-on-the-Hudson embrace this Christian icon? If he wins – which is what it’s all about, right?

How about this: can Tebow have any effect on his new trash-talking, potty-mouthed coach, Rex Ryan? “There’s not many NFL locker rooms you’re going to go where you have the cleanest language, so I’m not too worried about that,” says Tebow, gracious as ever.

Denver Broncos fans are in the first stages of grief.

New Orleans isn’t so happy, either: The Saints are in Purgatory, thanks to Coach Sean Payton’s bounty system for hurting opposing players. 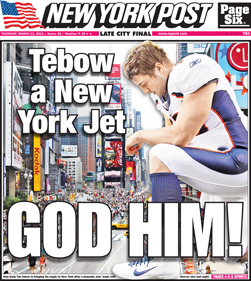 Is sports the arena where the values of justice and charity and morality are played out most vividly in American culture?

A new Pew poll shows Americans might prefer it to all the God-talk in politics.

It’s not likely to stop, though: Evangelist Franklin Graham met with religious leaders from the NAACP after they accused him of “bearing false witness” when he questioned President Obama's Christian faith.

One concrete result: Graham agreed to get involved in pressing the case on behalf of Florida shooting victim Trayvon Martin.

Something new: A pro-choice group wants to train ministers to defend and promote abortion rights.

The New Hampshire guy who said he had a business promising Bible-thumping clients he would take care of their pets after they were taken up in the Rapture now admits he wasn’t telling the truth.

So atheists and Harold Camping have something in common.

The Komen Foundation-Planned Parenthood furor isn't over: there are growing calls for Komen head Nancy Brinker to resign.