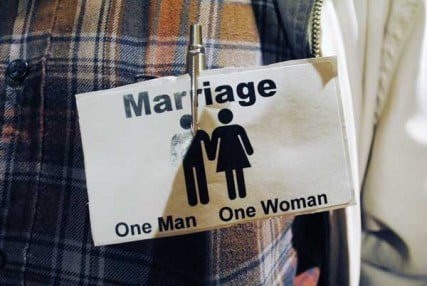 And while leaders from Preserve Marriage Washington are confident residents will vote to keep marriage between a man and a woman, a wild card lies in their path — one that's worth more than 4 million votes.

According to the 2010 U.S. Religion Census, more than half of the state’s 6.8 million residents don’t belong to a religious group. Preserve Marriage Washington, the organization behind the gay marriage petition (Referendum 74), is a coalition of community and faith groups, including the Washington State Catholic Conference.

“Almost 4.4 million people are unclaimed, so that’s the group, that if they vote, will decide this referendum,” said Patricia O’Connell Killen, editor of “Religion and Public Life in the Pacific Northwest: The None Zone,” and academic vice president at Gonzaga University.

“Any political issue, whether it passes or fails, depends by and large on how the vast majority of these unchurched are persuaded.”

A similar vote to override a gay marriage law in Maryland is also scheduled for November, as well as a proposed constitutional amendment to ban same-sex marriage in Minnesota. In Maine, voters will be asked whether to overturn a 2009 referendum that banned gay marriage.

Killen said evangelical and Catholic leaders in the state are actively working to overturn the same-sex marriage law, but said it’s impossible to know how much influence they have over the “unchurched.”

Joseph Backholm, chairman of Preserve Marriage Washington, said although churches were active in collecting signatures, there’s no way to know how many of the signatures came from the state’s unaffiliated population.

“I think there’s a collective wisdom about this subject, a common understanding of what marriage is and there’s plenty of unchurched people who look at this passionately and conclude that marriage should between a man and a woman,” he said.

Washington has had a domestic partnership law since 2007. In 2009, an “everything but marriage” expansion of that law was passed, allowing same-sex domestic partners the same rights and benefits that Washington state offers married couples. Gov. Chris Gregoire signed a full-fledged gay marriage bill earlier this year, but put it on hold pending the November referendum.

Zach Silk, campaign manager for Washington United for Marriage, which supports same-sex marriage, said the conservative movement is stronger and more energized this time around.

“They have a very impressive track record of winning these campaigns, and we expect them to spend millions to roll back the law,” Silk said.

Backholm said his side has more energy because redefining marriage is a grander issue.

“People in Washington want to treat people fairly, want them to have the same access to freedom and health care and everything else, but that doesn’t mean we have to redefine marriage. That doesn’t mean children don’t deserve a mother and a father,” he said.

“We’re talking to voters everyday about how marriage is a basic freedom that should not be denied to anyone,” he said. “It’s true that there are many in the state who do not attend church or affiliate with any religion, but we know that we need to remind all Washingtonians that treating others as one would want to be treated is a common value regardless.”

A recent poll conducted by Seattle-based Strategies 360 reported 54 percent of voters in the state think it should be legal for same-sex couples to marry.

Silk said he’s encouraged by the figures, but added that gay marriage supporters are the underdogs — at least at the voting booth. In 32 states that have held public votes on gay marriage, voters have sided with those opposed to same-sex unions.

(Tracy Simmons is the editor of SpokaneFAVS.com.)