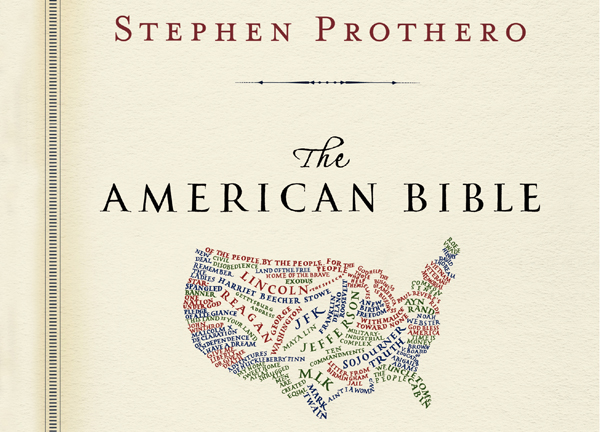 The Rev. Martin Luther King Jr.’s “I Have a Dream” speech riffed on Lincoln’s lofty language.

And Ronald Reagan drafted King’s dream of a country where character outweighs color into an argument against affirmative action. 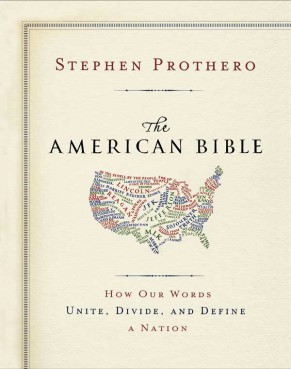 'The American Bible' by Stephen Prothero.

Like the Declaration of Independence, this almost consecrated canon inspires endless commentary about what it means to be American -- and what “America” means.

Prothero, a professor of religion at Boston University, collects these civil scriptures in his new book “The American Bible: How Our Words Unite, Divide, and Define a Nation.”

“We treat these core texts in a sacred way,” Prothero said in an interview. “Each has different meanings -- and they don’t necessarily reconcile with each other.”

So, “The American Bible” contains patriotic picks like the Pledge of Allegiance, and phrases like "city on a hill" that have been repeated by pilgrims, presidents and pundits across generations.

But some selections -- like the Supreme Court’s Roe v. Wade decision -- may be more reviled than revered by many Americans.

That’s precisely the point, Prothero says. Few documents have inspired more passionate debate than the 1973 ruling that legalized abortion -- and arguing remains the central ritual of the American republic.

Prothero says that he aimed to describe, not craft, the country's sacred scriptures. He had two main criteria: The texts had to be about America, and they had to stir controversy.

“It could have been the most brilliant thing in history, but it wouldn’t have gotten into my book unless it had a vibrant afterlife,” Prothero said.

As in his previous books, “God is Not One” and “Religious Literacy,” the prolific author urges Americans to do their homework. That is, read the primary texts for themselves and not take others’ interpretations at face value.

Prothero says his book about America’s most influential arguments was inspired by the petty partisanship of contemporary debates.

The religion scholar didn’t find a central American creed. Instead he found a cacophony of voices, a loud conversation stretching from the Plymouth pilgrims to Sarah Palin.

Seeking to catalog that conversation, Prothero patterned “The American Bible” on the Christian Bible. 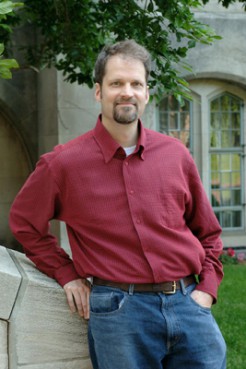 Stephen Prothero, a professor of religion at Boston University, collects civil scriptures in his new book ?The American Bible: How Our Words Unite, Divide, and Define a Nation.?

By Prothero’s own admission, “The American Bible” lacks demographic diversity.

“For better or worse, dead white men have had outsized influence over the course of American history, and among their powers has been the capacity to command an audience,” he writes in the introduction.

But “The American Bible” also gives voice to homegrown “prophets,” such as King and Malcolm X, who castigated the country for failing to live up to its ideals.

Anthea Butler, an associate professor of religious studies at the University of Pennsylvania, said “The American Bible” could have included more women, particularly suffragists like Susan B. Anthony. Feminists like Gloria Steinem and Betty Friedan could also have made the cut, Butler said.

The Boston Globe, meanwhile, chided Prothero for including “less thoughtful social critics, such as Operation Rescue’s Randall Terry,” who defends the assassination of abortion doctors in a commentary on Roe v. Wade.

“The danger of false equivalency always lurks in this kind of project,” the Globe writes. “Do all sides of an argument always deserve equally respectful reading?”

Lincoln probbably loses some gravitas by being in the same book as Terry, Prothero says.

But the commentaries like Terry’s that follow after each main selection form the “heart and soul” of “The American Bible,” Prothero argues. Everyone from Supreme Court Justice Antonin Scalia to lefty historian Howard Zinn gets space to sound off about what’s right and wrong with America.

The almost endless interpretations make “The American Bible” in some ways like a Jewish Talmud: a sacred text surrounded by impassioned argument.

“The way to wisdom here lies not in affirming simple truths but in engaging in difficult discussions,” Prothero writes. It's just those kinds of conversations, the scholar says, that his “American Bible” aims to inspire.

Listen below to a preview of our next Religion News Godcast, featuring an interview with Stephen Prothero. You can download the full episode beginning Wednesday, July 4, from the iTunes Store.

How much of "The American Bible" have you read?

We put together a quick survey to see how many of the works in "The American Bible" you've read. Take a look. At the end you can see the total scores.