(RNS) A large-scale Bible museum will open in Washington, D.C., within four years, say planners who have been touring the world with portions of their collection. 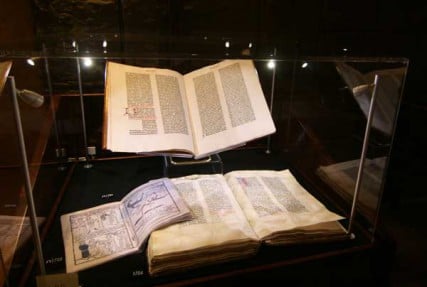 The first edition of the King James Bible, a work commissioned in 1604 upon the ascension of James, to replace the influential but divisive Geneva Bible. This extremely rare octavo edition of the New Testament was clearly intended for popular use, perhaps indicating why very few have survived.

Cary Summers, chief operating officer of The Museum of the Bible, a nonprofit umbrella group for the collection of the billionaire Green family of Oklahoma, said they considered Washington, Dallas and New York but decided the nation’s capital was the best location. The final name of the museum and its exact location have not been disclosed but planners hope to confirm a location later this summer.

Research they commissioned found that the general population was more willing to travel to the nation's capital for a Bible-focused museum than the other two cities, Summers said.

“In reality, the population base within that eight-to-10 hour drive of D.C. represents half the U.S. or two-thirds and there’s a lot of Christians in that group,” he said Tuesday (July 10).

Summers, who has been a consultant on the Creation Museum’s planned life-size Noah’s Ark in Kentucky, said the Bible museum will charge admission. Although
the museums of the Smithsonian Institution are free, he noted that the Newseum and the Spy Museum both charge admission and have been successful. 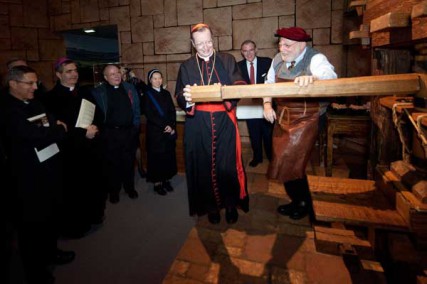 Cardinal Giovanni Lajolo, former president of the Governorate of Vatican City State and of the Pontifical Commission for Vatican City State, tries his hand at a life-size replica of the Gutenberg printing press. The 15th-century invention featuring movable type democratized learning and printed the famous 1455 Gutenberg Bible, a noble fragment of which is on display in Verbum Domini.

A sampling of the Bible museum’s offerings — from the collection of more than 40,000 artifacts — have been displayed in the Passages Exhibit at the Vatican and in Oklahoma City and Atlanta and will soon appear in Charlotte, N.C.

Summers said the traveling exhibit recreates at 80 percent scale the chamber of London’s Westminster Abbey where the King James Version of the Bible was written. A full-scale recreation is planned for the museum.

Steve Green, president of the Hobby Lobby arts and crafts chain and a Southern Baptist, said the museum will feature the history, contents and influence of the Bible but will leave it up to visitors to decide whether to believe the holy book. 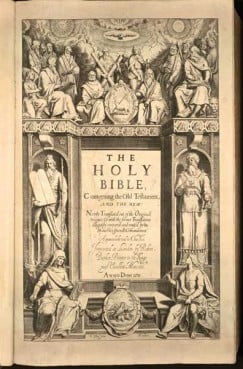 The first edition of the King James Bible, a work commissioned in 1604 upon the ascension of James, to replace the influential but divisive Geneva Bible. This extremely rare octavo edition of the New Testament was clearly intended for popular use, perhaps indicating why very few have survived.

“When we present the evidence, I think it’s going to be compelling for somebody to say, `Wow, this is a compelling book. I might want to consider what it has to say,’” he said.