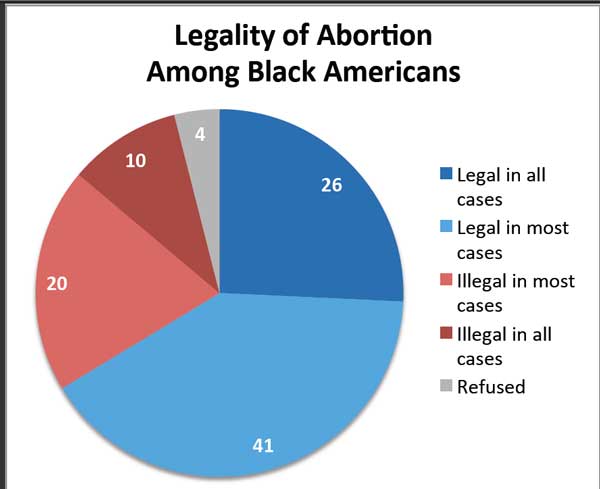 WASHINGTON (RNS) Compared to Hispanic Americans, black Americans are far more likely to believe abortion should be legal in most circumstances, even when they personally reject the procedure as immoral.

That’s one of the findings of a poll released Thursday (July 26) by the Public Religion Research Institute, which also explored these groups’ attitudes toward birth control and the extent to which their churches influence their opinions.

"Generally these social issues will not play a major role when these Americans vote in November's elections," said Daniel Cox, PRRI's research director. "Obama has a significant advantage over Romney among both African-Americans and Hispanics, and neither candidate's views on these questions will likely have much effect on their support."

This places Hispanic views on the abortion issue closer to those of Americans in general, 53 percent of whom hold that it should be legal in all or most circumstances.

But “abortion actually falls pretty low on the list of priorities for both these communities,” said PRRI CEO Robert Jones, who noted that three-quarters of both groups ranked the economy as a critical issue facing the country. Abortion, by contrast, was called critical by three in 10 Hispanic respondents and even fewer (17 percent) of African-Americans.

Fairly similar percentages of both groups (18 percent of blacks and 26 percent of Hispanics) considered same-sex marriage a critical issue.

African-Americans were not as likely as Hispanics to link their moral views of abortion to their opinion on the legality of abortion. Nearly three-quarters (73 percent) of Hispanics who believe abortion is morally wrong said that it should be illegal in all or most cases. Among blacks, 52 percent of those who consider it morally wrong also said it should be legal in all or most cases.

“Freedom of choice is probably one of the most precious components of what it means to be a Christian and black Americans have really been quite possessive and reflective on this fact,” Floyd-Thomas said. So even among those who consider abortion or same-sex marriage a sin, she said, there is the conviction that “what I might personally believe does not mean that the practice should not be an option.”

On birth control, strong majorities of blacks (92 percent) and Hispanics (85 percent) favored expanding access to it for women who can’t afford it. Responses to this question did not vary significantly based on religious affiliation, gender, age or level of education.

In general, blacks and Hispanics said one could hold different opinions on contraception than their churches and still be considered a good Catholic or Christian. More than eight in 10 (81 percent in both groups) said they can hold a different view and still be a person of good standing in their faith.

As for what pastors are preaching, here's what black and Hispanic congregants -- those who go to church at least once a month -- said they're hearing "often" or "sometimes" from the pulpit:

-- Abortion: reported by 54 percent of Hispanics and 30 percent of blacks.

-- Economic inequality: reported by 49 percent of Hispanics and 54 percent of blacks.

September 3, 2020
Related Posts
By Jack Jenkins
Amy Coney Barrett, controversial Catholic, re-emerges as potential Supreme Court pick
By Mark Silk
With Ginsburg's seat open, abortion moves to the center of the 2020 election
By Emily Reimer-Barry
Winning the hearts and minds of Catholics in a church divided
By Jim Wallis
The 2020 election is a moment of truth for white Christianity
By Jack Jenkins
Trump announces new Supreme Court justice options in apparent appeal to religious base