VATICAN CITY (RNS) With the recent death of Cardinal Carlo Maria Martini, Catholics who call for church reform on issues such as homosexuality and priestly celibacy have lost one of their last leading lights in the top echelons of the church’s hierarchy. 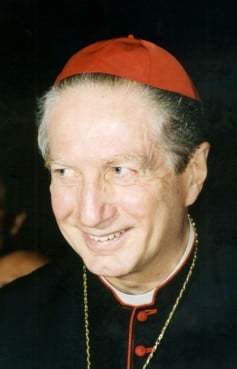 Italian Cardinal Carlo Maria Martini, a renowned biblical scholar and former archbishop of Milan, died Aug. 31 after a long battle with Parkinson's disease. He was 85. Cardinal Martini is pictured in a 1994 file photo.

Martini, who died Aug. 31, was a Jesuit and an archbishop of Milan from 1980-2002. More importantly, he was considered for decades the informal leader of “liberals” inside the church. But he has no clear successor in the current crop of cardinals.

He had a “rare combination of skills as a scholar, pastor, communicator and holy man,” said the Rev. Thomas Reese, a church expert and fellow at Georgetown University's Woodstock Theological Center. This allowed him to be an independent voice in the church that prizes conformity to tradition.

“If there was a young Martini in the church today,” Reese said, “he would not be made a bishop or cardinal.”

Since the late Pope John Paul II assumed the papacy, there has been an effort to remake the hierarchy by appointing bishops who would unquestioningly follow Vatican thinking started under John Paul. Ironically, it was John Paul who elevated Martini to the episcopacy in his first year as pope. After that, John Paul mainly appointed conservative bishops.

But the Rev. Antonio Spadaro, editor of a Jesuit-run official Vatican magazine, “Civilta Cattolica,” said the division between liberals and conservatives in the church is “forced and simplistic.”

Labeling Martini as a “liberal,” he said, has the effect of “silencing his prophetic legacy for the church,” effectively “killing” his message: “It is doubtless that there are different opinions in the church,” but they can coexist in the church's unity, which is not “monolithic,” Spadaro said.

Martini often distanced himself from those who portrayed him as an “anti-pope,” and always praised the more conservative Pope Benedict XVI. But his willingness to discuss ideas at odds with church doctrine made him a respected figure among nonbelievers and lapsed Catholics.

Observers were stunned when around 200,000 people queued outside Milan's cathedral to pay their tribute to the remains of the deceased cardinal last weekend.

“Thanks to his example, many who feel estranged from church structures and policies would listen to the Gospel,” noted Vittorio Bellavite of We Are Church, a group that advocates for church reform.

The warm send-off was in stark contrast to what was perceived as a Vatican cold shoulder. Neither Benedict nor his number two, Cardinal Tarcisio Bertone, attended Martini's funeral on Monday (Sept. 3) and Benedict didn’t mention the late cardinal during his Sunday Angelus prayer in St. Peter’s Square. For the funeral, Benedict sent a message praising Martini's “great openness of spirit.”

Faced with a church hierarchy filled with conservatives, Catholic liberals have few leaders left to turn to. “Frankly, there is almost no one,” said Luigi Sandri, a longtime advocate of grass-roots church reform.

He points to the figure of the Rev. Timothy Radcliffe, a prominent Dominican friar who was sometimes considered an intellectual and spiritual successor to Martini. For Sandri, the fact that he was never appointed a bishop is a telling example of the shift in the church in recent decades.

When questioned on who might eventually take Martini’s role in the College of Cardinals, church observers sometimes name Vienna's Cardinal Christoph Schoenborn.

Despite being a student of Benedict's when he was a theology professor, Schoenborn has become an unlikely champion for progressives for his tough stance on sexual abuse and for his apparent willingness to discuss delicate issues such as priestly celibacy.

Others point to Cardinal Joao Braz de Aviz, a soft-spoken Brazilian who was appointed last year as the head of the Vatican department overseeing religious orders. He has publicly acknowledged his links to liberation theology.

None of them, though, could be described as a “liberal” and they have shown no desire to challenge church doctrine.