TOLEDO, Ohio (RNS) Aaron and Jackie Frisch had more than their 15 minutes of fame when ABC's “Extreme Makeover: Home Edition” blew into town and built them a dream home four years ago. Ever since, they’ve been carrying out an extreme makeover of their own. 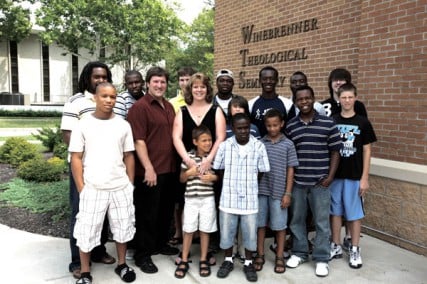 The Frisch family gathers outside Winebrenner Theological Seminary in Findlay, Ohio, where Jackie Frisch earned a doctor of ministry degree.

The couple already had 11 children — three biological, five adopted from Haiti and three from inner-city Toledo — when Ty Pennington and his crew arrived in Toledo in September 2008. Today, the Frisches claim 25 children in their expanded clan.

“Our motto is: ‘There’s always room for one more,’” Aaron Frisch said with a laugh.

Not all of their children live in the Frisches' 4,250-square-foot, 20-room, made-for-TV house on a cul-de-sac in West Toledo. One son is away at college and another is in the Army — both in Kentucky – leaving just 23 at home.

“I don’t want to say we branched out, but God led us in the direction of the young adults and college-age kids,” said Aaron Frisch, a Toledo firefighter, paramedic and physical therapist.

“One is from China, two are from Germany, one is from Sweden. … We also have kids from England and New Zealand, and those kids had immigrated to those countries from Ethiopia and Ghana. So all together we’ve got about 11 nations represented under our roof.” 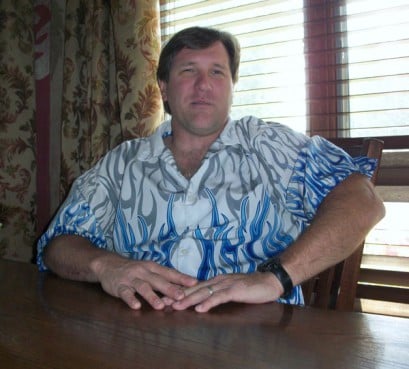 Aaron Frisch, 43, a Toledo firefighter, said the family’s motto is, “There’s always room for one more.” The Frisches had 11 children – three biological, eight adopted – when ABC’s Extreme Makeover: Home Edition built them a new house in 2008. Today they have 25 children.

Frisch, 43, a burly guy with martial arts training, said he and Jackie, 46, believe it is God’s calling in their lives to take needy children into their family.

The Frisches started adding older youths to the family after some of their Haitian-born adopted children began attending the University of Toledo. The sons would bring fellow students home, many of them international students separated from family and friends by thousands of miles.

Most of the Frisch family’s new family members have not been legally adopted, largely because they are over the age limit of 18. But each one has a story.

Take J.J., for example. An unofficial member of the Frisch family, J.J. is 24 and hails from Haiti. He lost his father in the 2010 earthquake and his mother is dying of cancer in Canada.

“He’s lost everything, so he’s here,” Aaron Frisch said. “He’s our son but he’s too old to be legally adopted. He is considering legally changing his last name to Frisch. So not every child that comes under the roof is a part of the family, legally, but these are our children.” 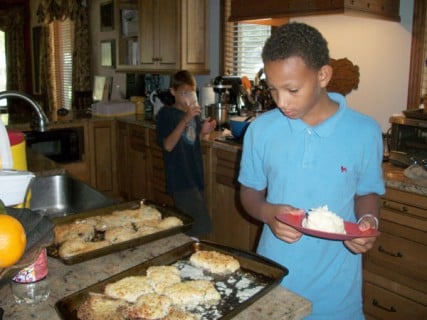 Isaiah Frisch (front) and Mekail Frisch get their Sunday buffet-style lunch in the Frisch family’s Toledo home. Their mother Jackie cooked the breaded pork chops but was too ill to join the family for the meal on a recent visit. She suffers from Ehrlers-Danlos Syndrome, which affects the connective tissue and has caused five major strokes.

Frisch acknowledged that it can be tough to provide for a family of 27 on a firefighter’s salary.

He works side jobs as a physical therapist; the older children who have jobs pitch in what they can, and Aaron Frisch said he gets a small amount of money from Lucas County Children Services.

His wife, a published author and speaker who used to work as a Christian counselor and a youth pastor, has been unable to work in the last year or so because of Ehrlers-Danlos syndrome, which affects her body’s connective tissue.

The disease has damaged Jackie Frisch’s heart, blood vessels, and other internal organs, her husband said, and his wife of 20 years has suffered five major strokes – two in recent months – plus countless minor strokes from blood clots.

“Right now, I’m fearing for her survival,” he said softly. “These last two strokes have knocked her about 20 rungs down the ladder. … But once again we trust in God. She’s not going to stand before him one minute before he calls her.”

Aaron Frisch, who was raised Jewish and became a Christian after falling for Jackie Frisch while in college, said the family stretches every dollar and gets unexpected help sometimes.

“It’s tough, but God tells us to tithe on our income and we do, and he opens up the storehouses whether it be a random check in the mail, whether it be food from the food pantry, or whether it’s somebody from Washington state who sends us clothes and shoes for school, which also happened.”

The Rev. Brad Wotring, pastor of the nondenominational Northpoint Church, said since the Frisch family started coming about a year ago, they have gone out of their way to help others.

“They have so many family members and are caring for so many people in their own family, yet on top of that wherever there’s an area of need in our church they are right there asking, ‘Hey, how can we be of service?’” Wotring said.

Being chosen for “Extreme Makeover” was a tremendous blessing, Aaron Frisch said, but he believes it was more than just getting to live in a big, beautiful house.

“This house is amazing and it has made our lives much more comfortable, but it wasn’t about the house,” he said. “It gives us an atmosphere to share God and to share the gospel, and we have been able to talk with so many tens of thousands of people more because of this experience.”

(David Yonke is the editor of ToledoFAVS.com.)