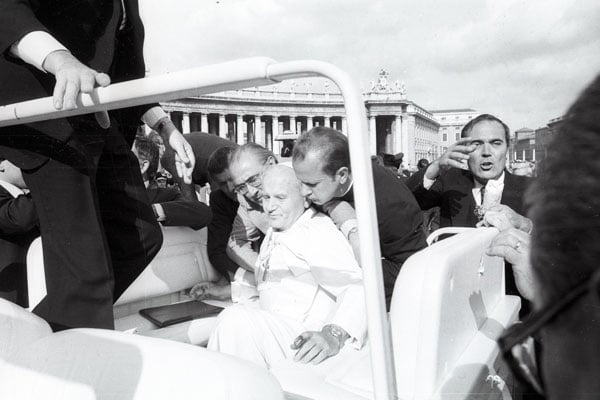 The 1980 Fiat Campagnola in which Pope John Paul II was traveling when he was shot in 1981, as it is exhibited in the Carriage Pavillion at the Vatican Museums.

VATICAN CITY (RNS) When an American archbishop offered the Vatican a car as a gift in 1909, Pope Pius X refused, saying he preferred to ride in a comfortable and much quieter horse-drawn carriage.

A century later, a new exhibition at the Vatican Museums shows just how far papal transportation has come since then.

A new permanent exhibition showcasing two centuries of papal travel was unveiled at the museums on Tuesday (Oct. 16). 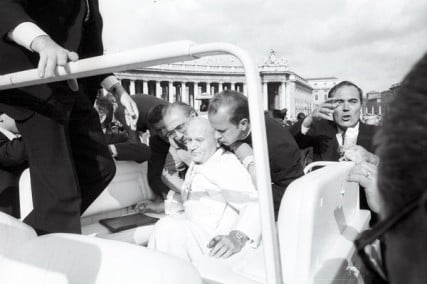 John Paul II is protected while inside his vehicle during a murder attempt in Vatican City at St. Peter's Square on May 13, 1981 (Copyright L’Osservatore Romano).

Among the items on display in the newly refurbished “Padiglione delle Carrozze” (Carriage Pavilion), there is the white, open-top 1980 Fiat Campagnola that Pope John Paul II was riding in on May 13, 1981 when he was shot and almost killed in St. Peter’s Square.

It is a symbol of “a church that always gets back up on its feet when it is wounded,” the curator of the exhibition, Sandro Barbagallo, told Italian news agency Ansa.

The most extravagant item on display is probably the majestic Berlina di Gran Gala, created in 1826 on the orders of Pope Leo XII. A “moving throne room” that was carried around Rome’s streets by six horses, it is painted in gold leaf and decorated with allegories representing papal virtues such as faith and justice.

The first car to enter the Vatican was a Bianchi Tipo 15, presented as a gift to Pope Pius XI shortly after his election in 1922. Italian carmaker Bianchi quickly doubled the gift with a newer Tipo 20 model, thus earning the title of first Vatican official car supplier. 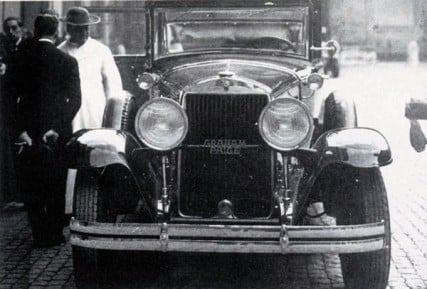 Only a few years later, in 1931, the era of horse-drawn carriages came to an end at the Vatican.

Vatican license plates were introduced in 1929, when the signing of the Lateran Pacts with Italy led to the end of the papal isolation inside the Vatican. Today, the pope’s car carries a white plate with the tag “SCV 1” in red letters. "SCV" stands for "State City Vatican."

In 1975, Pope Paul VI introduced the “popemobile,” a white jeep-style car that allowed the pontiff to salute crowds as he was slowly driven around. The popemobiles are now made by Mercedes-Benz. 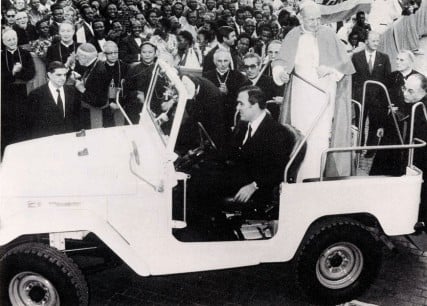 The latest addition to the papal car collection is a couple of electric cars by French carmaker Renault that are used on the grounds of the Vatican villas in Castel Gandolfo, the pope's summer retreat south of Rome.