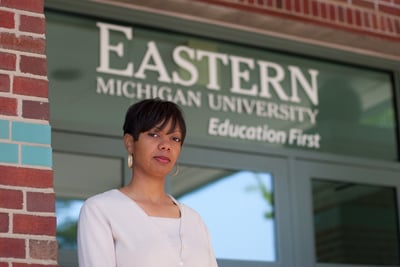 (RNS) A graduate counseling student who was expelled from Eastern Michigan University after citing her faith when she declined to advise a gay client has settled her case with the school. Julea Ward was dismissed from Eastern Michigan University after she declined to counsel a patient in a homosexual relationship as part of her counseling degree program.

Julea Ward, citing her evangelical Christian beliefs, disagreed with professors who told her she was required to support the sexual orientation of her clients. She was assigned a client who sought counseling on a same-sex relationship but later asked to have the client referred to another counselor.

In January, the 6th U.S. Circuit Court of Appeals ruled that Ward might have been expelled because of her faith and sent the case back to a lower court.

“Public universities shouldn’t force students to violate their religious beliefs to get a degree,’’ said Jeremy Tedesco, a lawyer with the Alliance Defending Freedom, who represented Ward before the appeals court. “The 6th Circuit rightly understood this and ruled appropriately, so the university has done the right thing in settling this case.”

The ADF, which was formerly known as Alliance Defense Fund, said Ward’s expulsion will be removed from her record.

The university in Ypsilanti, Mich., issued a statement saying the settlement totaled $75,000, and the school’s curriculum requirements remain intact.

“The faculty retains its right to establish, in its learned judgment, the curriculum and program requirements for the counseling program at Eastern Michigan University,” said Walter Kraft, the university’s vice president for communications. “EMU has made the decision that it is in the best interest of its students and the taxpayers of the state of Michigan to resolve the litigation rather than continue to spend money on a costly trial.”