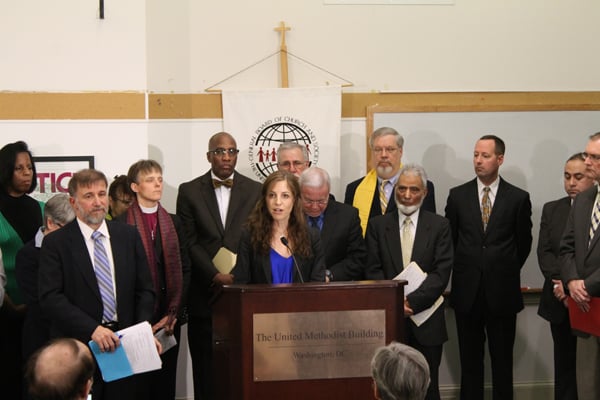 WASHINGTON (RNS) Dozens of the nation’s faith leaders said Tuesday (Jan. 15) that they’re ready to take on the gun lobby and demanded that politicians take quick and concrete steps to stem gun violence.

At a Capitol Hill press conference and in a letter to Congress, more than 45 clergy and heads of religious groups -- representing the spectrum of American religious life -- petitioned lawmakers to reinstitute a ban on assault weapons, require background checks on all gun buyers, and make gun trafficking a federal crime. 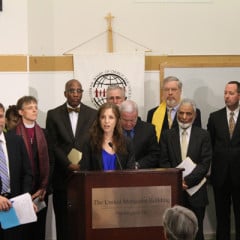 Organized by the two-year-old coalition Faiths United To Prevent Gun Violence, the signers said the slayings at a Newtown, Conn., elementary school last month had pushed them to redouble their efforts, and created an opportunity to beat back the gun lobby.

LaPierre’s statement after Newtown that the “the only thing that stops a bad guy with a gun is a good guy with a gun" is “morally mistaken” and “religiously repugnant,” Wallis said.

“The world is not full of good and bad people. That is not what our scriptures teach us,” but that each individual is both good and bad, Wallis said.

“And when we are bad or isolated or angry or furious or vengeful or politically agitated or confused or lost or deranged or unhinged, and we have the ability to get and use weapons only designed to kill large numbers of people," Wallis continued, "our society is in great danger."

The coalition is part of a larger movement, led by President Obama and some Democratic members of Congress, to tighten gun laws in the wake of the Newtown massacre and previous mass killings by lone gunmen in Aurora, Colo., Tuscon, Ariz., and elsewhere in the past several years.

A Washington Post-ABC News poll published on Jan. 14, a month after the Newtown massacre, found that 52 percent of Americans said the horror of Newtown had made them more supportive of gun control.

Others who signed the letter include: Carol Blythe, president of the Alliance of Baptists; Sister Carol Keehan, president and CEO of the Catholic Health Association; Sayyid M. Syeed of the Islamic Society of North America; Rajwant Singh, chairman of the Sikh Council on Religion and Education; and Suhag Shukla, executive director of the Hindu American Foundation.

Polls show that Americans generally favor the restrictions endorsed by the coalition even if their representatives in Congress may not, said Vincent DeMarco, national coordinator of Faiths United to Prevent Gun Violence.

The Rev. J. Herbert Nelson II of the Presbyterian Church (USA)'s Washington office said people of faith must reframe the debate on gun control, and support “those of us who would challenge the false choice between guns and freedom.”

The NRA, the most powerful of gun owners' rights groups, argues that any new restrictions on guns threaten the Second Amendment right to bear arms.

Nelson noted that more Americans have been killed in domestic gun violence than in foreign wars, and that the coalition had decided to speak out on the birthday of Martin Luther King Jr., who would have been 84 on Tuesday.

“I am convinced if he were here today, this issue would be the priority of his leadership,” Nelson said.

Rachel Laser, deputy director of the Religious Action Center of Reform Judaism, noted that King had deplored the proliferation of weapons in the United States before he himself was shot to death. She quoted King’s words from 1963:

“By our readiness to allow arms to be purchased at will and fired at whim, by allowing our movie and television screens to teach our children that the hero is one who masters the art of shooting and the technique of killing . . . we have created an atmosphere in which violence and hatred have become popular pastimes,“ she quoted King.

“We are done sitting shocked on the sidelines,” Laser said of the coalition.

But despite the pronouncements of religious leaders, gun rights supporters have refused to yield the moral high ground.

"I think Martin Luther King would agree with me, if he were alive today, that if African-Americans had been given the right to keep and bear arms from day one of the country's founding, perhaps slavery would not have been a chapter in our history," Ward told CNN.