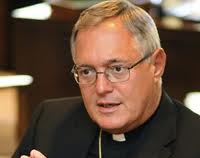 Tomorrow, the Rhode Island General Assembly will hold its first vote on whether to legalize same-sex marriage. If things go as expected, the Ocean State will shortly make New England the first marriage equality region in the country.

But like King Cnut the Great (though perhaps less prepared to retreat before the inevitable), Bishop Thomas Tobin of the Catholic Diocese of Providence has commanded the SSM tide to halt at his feet. Contrariwise, Bishop Nicholas Knisely of the Episcopal Diocese of Rhode Island has gladly chosen to go with the flow.

Tobin took his stand earlier this month on the Immutable Plan of Nature’s God.

The proposal to legalize same-sex marriage is an attempt to redefine the institution of marriage as it has existed in every culture from the very beginning of human history. Marriage between a man and a woman was designed by God for two specific purposes: to affirm the complementary roles of males and females in a loving relationship, and to provide a stable foundation for the procreation and raising of children. Homosexual relationships can achieve neither of those goals.

Secondly, homosexual marriage enshrines into civil law immoral activity. The natural law, the Holy Scriptures, and long-standing religious tradition are very consistent in affirming that homosexual activity is sinful, contrary to God’s plan. It should never be encouraged, ratified or “blessed” by the state. Part of what informs my opinion is that before I became a priest and then a bishop, I was a scientist. So I know the importance of trusting evidence that we see with our own eyes. I have seen what St. Paul describes as the fruits of the Holy Spirit (Galatians 5:22-23) in the married lives of two men and of two women. I have seen relationships that are loving, mutual, and monogamous and that have lasted a lifetime. Jesus tells us that we must test each tree by looking at the goodness of its fruit (Luke 6:43-45). Across our congregations and communities, I can see the goodness of gay and lesbian couples and their families.

There are, of course, a lot more Catholics in Rhode Island than Episcopalians–better than 20 times as many. Tobin’s problem, however, is that Catholic New Englanders retain ancient memories of being oppressed strangers in a religiously strange land. They prefer not to return the favor by holding others to their church’s moral regime, even when they adhere to it themselves.

Moreover, many of them have seen the same kinds of same-sex relationships as Knisley, including ones recognized as marriages across the border in Massachusetts and Connecticut, and in Vermont and New Hampshire and Maine. Like St. Paul, they believe that while there are three enduring theological virtues–faith, hope and love–the greatest of them is love.