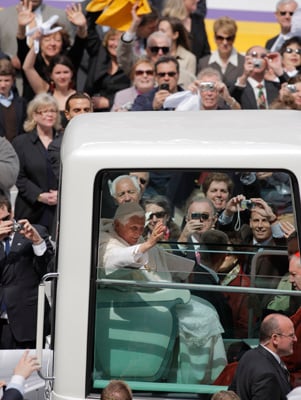 Pope Benedict arrives on Sunday at Yankee Stadium for the last Mass of his U.S. trip. For use with RNS-POPE-SUNDAY, transmitted April 20, 2008. Religion News Service photo by Chris Faytok/The Star-Ledger of Newark, N.J.
February 14, 2013
Alessandro Speciale

VATICAN CITY (RNS) Addressing church leaders for one of the last times of his papacy, Pope Benedict XVI said Thursday (Feb. 14) that he intends to live “hidden from the world” after he retires on Feb. 28.

But news that his closest aide will assist his successor raised the issue whether Benedict will continue to exert influence on the papacy even in retirement. 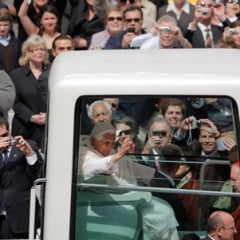 Pope Benedict arrives on Sunday at Yankee Stadium for the last Mass of his U.S. trip. For use with RNS-POPE-SUNDAY, transmitted April 20, 2008. Religion News Service photo by Chris Faytok/The Star-Ledger of Newark, N.J.

The Vatican's top spokesman said Archbishop Georg Gaenswein, the pope's former personal secretary, will remain in his current role as head of the papal household after the election of Benedict's successor. He will live by Benedict's side in a small convent within the Vatican walls.

Benedict appointed Gaenswein Prefect of the Papal Household, a role that entails setting up the pope's agenda and meetings, on Dec. 7, when arguably he had already decided to retire. L'Osservatore Romano, the Vatican's semiofficial newspaper, reported on Monday that the decision to step down had been made after Benedict's March 2012 trip to Mexico and Cuba.

The Rev. Federico Lombardi, the head of the Vatican press office, said Gaenswein will leave the Vatican with Benedict on Feb. 28, when the pope's resignation becomes effective at 8 p.m.

Benedict and his secretary, together with four lay religious women who served in the papal apartment during his eight years as pope, will remain in the papal villa in Castel Gandolfo, outside Rome, as cardinals from all over the world gather to elect a new pope.

According to church law, the conclave to elect Benedict's successor should begin 15 to 20 days after the end of the previous pontificate.

Lombardi dismissed questions over Gaenswein's role and its possible influence on the next pope. “It's a very practical position, having to do with the pope's appointments,” he said. “It is not involved in matters of governance.”

On Thursday, the 85-year old pontiff said he would remain “hidden from the world” after retirement, confirming his Monday resignation announcement that spoke of “a life dedicated to prayer.”

In a 45-minute unscripted speech to Rome's priests, the pope recalled his time at the Second Vatican Council (1962-1965) as a young theologian charged with assisting cardinals who were debating far-reaching reforms on issues such as religious freedom, ecumenism and liturgy.

The speech allowed Benedict to return to one of the key themes of his eight-year pontificate, stressing that the council's reforms shouldn't be seen as a break within the church's millennia-long tradition.

He blamed the media for framing the discussion and the results of the council into “the categories of politics.”

“This council of the media was accessible to everyone, and it created many problems. It created many miseries ... seminaries closed, convents closed, the liturgy banalized," he said. "The real Council had great difficult being realized, because the virtual Council was more powerful."

Related Posts
By Claire Giangravé
Vatican Museums used to be an overcrowded ‘hell,’ say tour guides. COVID-19 may change that.
By Alejandra Molina
We have a story to tell: Indigenous scholars, activists speak up amid toppling of Serra statues
By Nicole Winfield
Vatican prosecutors seize data from St. Peter’s Basilica
By Alejandra Molina
Who is Junipero Serra and why are California protesters toppling statues of this saint?
By Claire Giangravé
With new document, Vatican implements practical steps for environmental sustainability