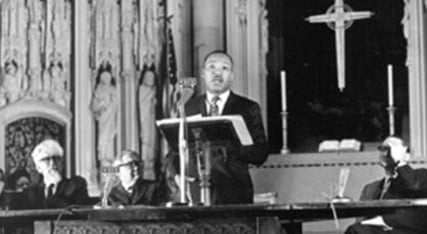 On April 30, 1967, Martin Luther King Jr. gave a speech at New York’s Riverside Church. It was one of his finest, and would later earn him a spoken word Grammy. The primary topic of his address was not the plight of black men and women or even race in general. No, that day his speech was entitled, “Why I Am Opposed to the War in Vietnam.” In it, he offered a profound nugget of truth:

Let me say finally that I oppose the war in Vietnam because I love America. I speak out against this war, not in anger, but with anxiety and sorrow in my heart, and, above all, with a passionate desire to see our beloved country stand as the moral example of the world. I speak out against this war because I am disappointed with America. And there can be no great disappointment where there is not great love.

As King points out with characteristic eloquence, disappointment is not rooted in disdain or despair. It grows from the fertile soil of love. When we love someone, we are able to see the best parts of them, even when it appears sullied by the dirt of their worst attributes. Because we love, we believe that they can be better and do better.

What is true for external expressions of disappointment is also true internally. I think of John the Baptist, the Biblical paragon whose earmark message was, “Repent for the Kingdom of God is near.” It was a difficult sermon to swallow growing up, and a portion of scripture I often rushed past, focusing instead on the birth of Christ. Who doesn’t prefer singing Christmas carols to confessing sin? But perhaps my difficulty in swallowing John’s sermon was rooted in an incomplete understanding of repentance.

The way most of us were taught it, repentance means owning up to how rotten you are. It means saying out loud, if only in the auditorium of your own soul, that you are a selfish, sinful, deeply defective human being who grieves the heart of God and that you are very, very sorry about it. It means dumping all your pride on the ground and stamping on it, since pride—as in ego, arrogance, vainglory—is the root of so much evil.

But what if the call to repent is more than that? What if it is rooted in the knowledge of a God who loves us and cuts a preferable path because he knows we can be better and do better? What if it hinges on God’s goodness rather than our badness? This understanding might explain why people traveled days on foot, to be baptized by John, and often stuck around for days or weeks after to hear him preach.

“What sounds like a threat to us sounded like a promise to them,” Taylor says. “We hear guilt where they heard pardon.”

As a faith and culture writer, I’ve often found myself disappointed both by my country and my fellow believers. For this, some have called me unpatriotic or a self-hating Christian. But as King and Taylor remind us, feelings of disappointment and the call to carve a better path do not derive from a place of hatred, but a place of sincere affection. I love my country and I love my Christian brothers and sisters.

So when an occasion calls for it, let us embrace our deepest disappointments. And let us voice them.

Not because we disdain or despair.

But because we love and love much.