(RNS) “In the church,” Chicago Cardinal Francis George once said, “everything has happened at least once!” That’s no surprise given that the Catholic Church is a nearly 2,000-year-old institution that has adapted to radically different epochs.

But electing a new pope while the former pope is still alive? That’s rare.

Indeed, this colorful and curious history continues to be written in today’s headlines, as George and 114 other cardinal electors gather in Rome to choose a successor to Benedict XVI – the first pope to resign in six centuries, and after a troubled papacy that has many historians reaching back to the Renaissance for apt comparisons.

So what are some other firsts and lasts, quirks and facts of papal history that you should know about? There are plenty, and Religion News Service has compiled a handy guide: 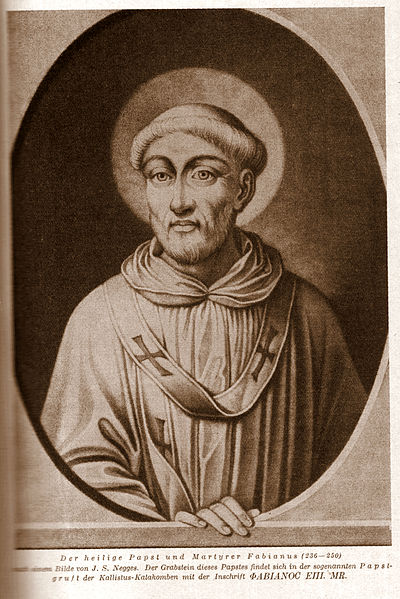 Pope Fabian was declared pope in 236 A.D. when a dove (a symbol of the Holy Spirit) landed on his shoulder, even though he wasn’t even a priest. RNS photo courtesy Wikimedia Commons/ Public Domain (http://bit.ly/XOw5u0).

BONUS: Was there really a Pope Joan? No, but it’s too good a story not to keep coming up.

Sources: “101 Questions and Answers on Popes and the Papacy,” by Christopher Bellitto; “Lives of The Popes: The Pontiffs from St. Peter to John Paul II,” by the Rev. Richard P. McBrien; Catholic News Service, Salvador Miranda of Florida International University.