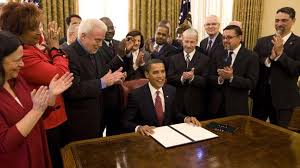 It would be hard to imagine a better choice to head the White Office of Faith-Based and Neighborhood Partnerships than Melissa Rogers. Since her days as general counsel for the Baptist Joint Committee, Rogers has been one of Washington’s leading players in the church-state arena–a traditional Baptist separationist with a talent for forging consensus.

Rogers replaces Joshua DuBois, who as a 26-year-old staffer in the 2008 Obama campaign headed a religious outreach effort that was more rhetoric than reality. But the newly elected president liked him, and put him in charge of the office established by George W. Bush to advance the cause of faith-based social service provision. Under DuBois, the renamed operation expanded into an all-purpose religious affairs desk. Among DuBois’ responsibilities–which the president singled out in announcing his resignation at this year’s National Prayer Breakfast–was to provide his boss with a daily snippet of Scripture to reflect on. Overall, the profile of the office was kept as low as possible, such that it took digging by Politico to determine how much stimulus money went to faith-based organizations (FBOs).

Rogers herself oversaw the office’s first advisory board, a disparate collection of mostly clerical cats whom she did a fine job of herding into committees that produced an array of recommendations for the office to pursue. She ran the committee charged with reform of the office, and this resulted in a November 2010 executive order that went some way toward bringing the Bush Administration’s religious enthusiasm under constitutional control. For example, secular alternatives now have to be provided to clients who object to receiving services to which they are entitled from religious providers.

[W]hile religious organizations should have full freedom to make religious calls regarding jobs subsidized by tithes and offerings, taxpayers are right to expect to be able to compete for positions created by government grants without regard to their personal religious beliefs or lack thereof. Thus, the Obama administration should undo Bush policies that broke with a long and proud tradition of equal opportunity in federally funded jobs regardless of religion or creed.

It’s worth recalling that John DiIulio, the large-caliber academic who first headed the office under Bush, himself supported that long and proud tradition. Had the Administration been prepared to do as they wished–and as Candidate Obama said he would in 2008–there would have been no need to hide the office’s light under a bushel during the past four years.

It remains to be seen whether the White House will let Rogers play the kind of public role a person of her stature ought to play. In that regard, it is not a good sign that her Executive Office handlers would not permit her to talk to the press after her appointment was announced. Nor is it promising that they decided to announce it at the very moment when the attention of the country’s religion reporters was all but monopolized by the papal election.

What’s important is the future of the office itself. Will it move out of the shadows, provide a proper accounting of the activities for which it is responsible, and build an understanding of what is and is not the proper place of religious organizations in the governmental sphere? No one is better equipped to do the job than Melissa Rogers.  The question is whether she will be allowed to do it.