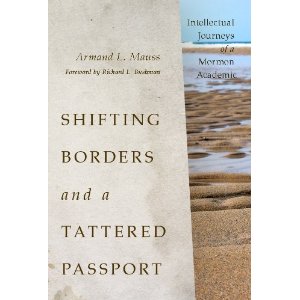 I'm heading out to California today for the Claremont Graduate School's conference on the future of Mormon Studies, which looks ahead while also honoring the past. The event is simultaneously a lovefestschrift for retired sociologist Armand Mauss and a glimpse into the 21st century, with talks by established scholars like Richard and Claudia Bushman, Jan Shipps, and Levi Peterson, as well as rising stars like Matt Bowman and Claremont's own Patrick Mason.

I'm giving a paper on the evolution of Mormon memoir as a genre. My talk deals with the issues of memoir as propaganda and memoir as factual autobiography. I see Mormons as espousing both of those traits, and that is not necessarily bad (at least according to George Orwell), but it's important to examine our reasons for writing and consciously shaping our records.

In preparation for the event I've been reading Armand's memoir Shifting Borders and a Tattered Passport: Intellectual Journeys of a Mormon Academic. If you haven't seen it, I encourage you to read it, particularly if you're interested in the birth of Mormon Studies as a discipline in the late 20th century. Armand was instrumental in midwifing that discipline--and as his story shows, such advocacy was not without professional and ecclesiastical consequences.

I'll post some notes from the conference sessions on Friday and Saturday.

P.S. Check out the new Claremont Journal of Mormon Studies. The inaugural issue is available for free here.