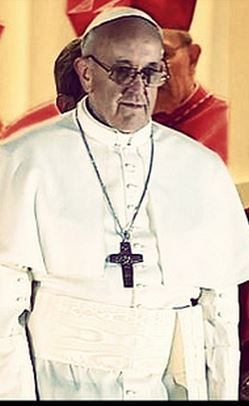 Pope Francis is taking the world by storm. Let us count the ways he's appealing to me.

* Meet and mingle. From taking the minibus rather than the limo to paying his own hotel bill to wading into crowds of well-wishers, the pope has made it clear that he is going to behave less like a prince of the church than a man of the people.

* No more Prada. Not only is he continuing to wear his black pants and sensible shoes, but he's gone so far as to tell the cardinalate to don basic black on one occasion. Dressing up--the physical manifestation of Roman clericalism--is now out of order in the Vatican.

* Il Poverello. Francis has given every indication that concern for the poor will be the watchword of his papacy. At his Saturday talk to the thousands of journalists who covered his election, he told how it was in order to keep them in mind that he chose to name himself after St. Francis of Assisi. As he did when he was appointed archbishop of Buenos Aires, he told Argentines not to come to his installation but to donate to charity the money they would have spent on doing so. I suspect (as Michael Sean Winters does) that his papacy is going to seriously disappoint Catholic free-marketeers like George Weigel and Robert Sirico--to say nothing of Paul Ryan.

* Climate Change. Speaking of his namesake, the new pope identified him as "the man who loves and safeguards Creation," immediately adding, "In this moment when our relationship with Creation is not so good—right?"

* Religious Pluralism. To the assembled journalists, Francis made a point of acknowledging that some were neither Catholics nor believers, saying that he was blessing them silently as a way of "respecting the conscience of each one." The following day, he singled out for praise a book on God's mercy by Cardinal Walter Kaspar, the liberal ecumenist who publicly disagreed with rigorist policies of his predecessor--including Benedict's outreach to the the St. Pius X Society. Not good news for those interested in a smaller, more traditionalist Church.

* Reform of the Vatican. After his election, Francis departed from tradition and did not immediately reappoint the heads of the major offices of the Curia. On Saturday came the announcement that they would only be reappointed provisionally. That's how a new regime begins.
* The Scandal. There was a report in the Italian press that upon meeting Cardinal Law at Santa Maria Maggiore, Francis told the disgraced cleric never to show his face again at his sometime titular church and to prepare to move out of his luxurious digs on the premises to a monastic cell. But the report was subsequently denied by a Vatican spokesman as "completely and totally false." More's the pity.