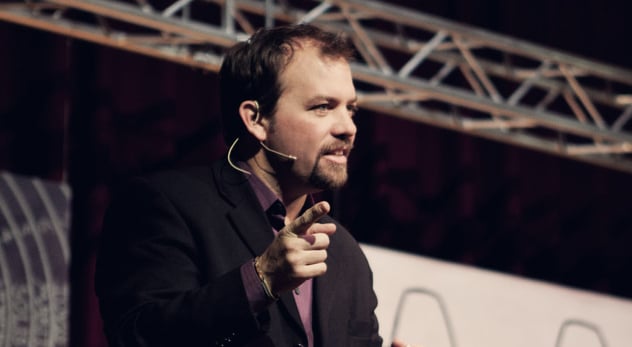 James K.A. Smith is a voice I always listen to. His work on faith, culture, and theology stretch the bounds of my thinking each time I encounter them. As professor of philosophy at  Calvin College  in Grand Rapids, Michigan and the editor of Comment magazine, he's shaping the thinking of the next generation of Christian leaders. And his newest book, Imagining the Kingdom: How Worship Works, is fantastic. Here he outlines the themes of his Cultural Liturgies trilogy, which explore worship, spiritual formation, and the overuse “Kingdom” language among many Christians today.

JM: You've written on the subject of the "Kingdom" before – is this book a follow-up?

JS: Yes, Imagining the Kingdom: How Worship Works is actually the second volume of my Cultural Liturgies trilogy. The first volume, Desiring the Kingdom, laid out my model for a "liturgical" understanding of persons and culture. The basic point is that human beings are not primarily "thinking things," as modernism taught us; rather, as Augustine would put it, we are what we love. The core of the human person is not the mind but the heart. But our hearts – our loves – are formed and shaped by the practice – the "liturgies" –we're immersed in. In this second volume, Imagining the Kingdom, I deepen this account by focusing on the power of habit and its importance for thinking about spiritual formation.

JM: We hear the word "Kingdom" used a lot. Do you ever feel like it’s used too loosely? Could you give us a working definition?

JS: I think you're right that "kingdom" language is sometimes used almost tritely, as just Christian lingo ("kingdom" work, "for the kingdom," etc.). And of course there are some who are just a little too eager to identify their vision or project with "the kingdom."

I use the term to signal that God's concern is as wide as creation itself. So God does not just have a plan for individual souls, for just for "churchy" stuff. God's desire is for the flourishing of all of creation. And the way the Scriptures talk about that is in terms of the "kingdom" – that all of creation is under the lordship, the kingship, of the Creator we know in Jesus.

But "kingdom" language is also eschatological. We pray for "kingdom come." And until Jesus returns, the kingdom is always not yet. So WE don't bring the kingdom about, and no regime or nation or empire should be confused with "the kingdom of God." At the same time, as Tom Wright has shown in his recent book, How God Became King, you also can't get away from the fact that the Gospel is announced in political language. Jesus doesn't announce a "club" or a "team" or an "organization": he comes to inaugurate a kingdom, which is a political entity. But at the same time, he emphasizes that his kingdom shouldn’t be identified with any earthly empire.

So speaking of the "kingdom" should encourage Christians to be concerned with the common good, with "all things." But the language of "the kingdom" should also come with a built-in critique of our penchant to think our nation or empire or denomination is "the kingdom." Nope: we're still praying "kingdom come," so obviously it hasn't arrived in its fullness. We, as the body of Christ, are called to be that "people" (that "polis," you might say) who embody that coming kingdom in the "not yet."

JM: Your subtitle is about worship, which we don't normally associate with "Kingdom." How are the two related?

JS: This is actually crucial to my argument. But first we have to expand our definition of "worship." For most contemporary evangelicals, worship is primarily expressive: we think of worship as something we do, showing and expressing our devotion and gratitude to God. Of course that's true. But historically, that has only been one side of worship. The Christian tradition has also emphasized that worship is not only expressive, it is also formative. So worship is not just an "upward" expression of our praise, it is also "downward" encounter in which God meets us and molds us and shapes us. So intentional Christian worship is the primary space in which God shapes us into that "kingdom-oriented" people. Worship, you could say, is practice for the kingdom. And through our immersion in worship, our loves and desires are "aimed" toward the kingdom of God.

JM: On a practical level, how can one lead a more vibrant worship life? What tips would you offer?

JS: This is the focus of the final chapter of Imagining the Kingdom. To be honest, one of my concerns is that we realize that being "vibrant" is not the only – and not even the most important – factor in worship. What's really important is that we think carefully about the form of our worship. Because if worship is how we are formed into kingdom-people, then what's really crucial is that the shape and rhythms of Christian worship embody that kingdom. In other words, it's important that the shape of our worship reflect the story of God's redemption of the world. And I would suggest that instead of trying to come up with the "next best thing" in worship innovation, we would do well to look back to historic wisdom. Ancient spiritual disciplines and historic Christian worship have a formative power that can counter our deformation in "secular" liturgies.

I know this runs counter to the sort of "worship" industry as it plays itself out on the conference circuit. I'm not opposed to heart-felt expression, and I'm certainly not opposed to the importance of emotion. (I'm a Reformed charismatic who has also written a book called Thinking in Tongues!) But the fact is, you can have very vibrant, sincere "worship" which really has the form of a secular liturgy with a little Jesus thrown in. In that case, the form of worship is what's really forming us, and not toward the kingdom.

These are really important matters, and I'm not doing justice to them in this space. I hope your readers might look at the full argument in Imagining the Kingdom. I'd really love to kick-start a conversation that prompts evangelicals to ask new questions about the form of worship, precisely because it is the heart of discipleship.

JM: You said that Imagining the Kingdom is the second volume of a trilogy. What will be the focus of volume 3?

JS: I'm beginning work on the third volume now, which will focus on political theology. The working title right now is Embodying the Kingdom. I want to revisit the categories we use to think about the relationship between faith and politics. Many have realized that the project of the "Religious Right" was misguided. But I'm equally worried about a generation of post-Religious-Right Christians who, with the best of intentions, might be buying into a model that is equally problematic. This will be the focus of my work over the next couple of years, but it's also the conversation I want to foster as the new editor of Comment magazine.

JM: The first book of yours I ever encountered was Letters to a Young Calvinist. You teach at Calvin College, are a member of the Christian Reformed Church, and maintain ties to the Reformed tradition.  Yet you seem to shy away from the sort of Calvinism associated with John Piper, Albert Mohler, and The Gospel Coalition. Why is this? Doesn't your theology align with theirs?

JS: Your question gets at something that has puzzled me over the last few years: how is it that the most famous "Calvinists" in this country are Baptists? Trying to sort that out is one of the reasons I wrote Letters to a Young Calvinist. But let me take a stab at offering a more succinct answer.

When Piper, Mohler and other "new Calvinists" describe themselves as "Reformed," they are referring specifically to a doctrine of salvation that emphasizes the sovereign grace of God (with a particular understanding of election, predestination, freedom, etc.). As a Reformed Christian, I agree with them on these matters of soteriology. In this way, we are part of a stream that reaches from Augustine through John Calvin and Jonathan Edwards.

However, the difference is, for me, being "Reformed" also means a lot more than that. John Calvin wasn't just seeking to reform the doctrine of salvation; he sought to reform the church, worship, indeed all of society. This richer, fuller expression of the Reformed heritage is the legacy of Reformed and Presbyterian denominations that are associated with the "magisterial" Reformation. So for folks like me, while we might agree with the young, restless, and Reformed about a doctrine of salvation, we're also very puzzled when people call themselves "Reformed" but don't baptize infants!

It's not a turf war.  I share a lot of resonance with The Gospel Coalition on some matters, including concerns about the authority of Scripture.  But then I disagree on some biggies, like the ordination of women. I look for partnerships where I can build them, and on matters of cultural witness, there's a lot we'll agree on. But I think I'm always viewed with a hint of suspicion.