A new poll conducted by The Barna Group shows that the Bible’s influence is waning among Americans, but not nearly as quickly as some might think. And perhaps not for long.

“Influence of the all-time bestseller is losing ground,” the study report declares. But the numbers show that the Bible is still highly influential among Americans. 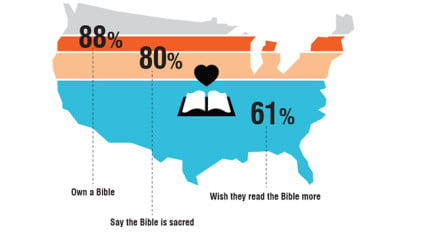 Courtesy of The Barna Group.

But the most telling numbers in terms of forecasting are the ones broken down generationally. The study shows that Mosaics (ages 18 – 28) are actually more interested in the Bible than the general population. If these numbers are any indication, we may actually find that the Bible’s influence will increase over time, at least in the near future with natural attrition. Mosaics are more likely than adults in general to say they look to the Bible for wisdom on a whole range of issues:

Courtesy of The Barna Group.

A study like may provide more than raw data. It may serve to critique those who have promulgated a narrative about an “anti-Christian America” that is antagonistic, if not downright hostile, toward the Christian faith. It may also critique those who claim that America is an increasingly “secular” society with a religious future that resembles Europe. According to at least one study, Americans are still very much interested in the Christian faith and its scriptures.

The Barna Group is a leading national research and polling firm focused on the intersection of faith and culture.

News
In Oregon, churches and anti-fascists unite to provide mutual aid to fire evacuees and others in need
News
Citing Scripture, Pence switches out Jesus for the American flag in convention speech
General story
Trump was right. God can be hurt. But not by Biden election, say theologians
News
Apt Bible passage at Catholic Mass coincides with earthquake
News
John MacArthur believes the Bible trumps COVID-19 public health orders. Legal scholars say no
© Copyright 2020, Religion News Service. All rights reserved. Use of and/or registration on any portion of this site constitutes acceptance of our User Agreement and Privacy Policy, Privacy Statement and Cookie Notice. The material on this site may not be reproduced, distributed, transmitted, cached or otherwise used, except with the prior written permission of Religion News Service.