“The Bible says, ‘avoid even the appearance of evil,’” the youth group volunteer chided, her bony finger wagging.

I’d been standing in a hallway with some friends having a harmless conversation about schoolwork, but that mattered not. It appeared that we might be up to no good, and this was sinful enough.

This verse is popular among conservative Christians, but there’s just one not-so-tiny problem: it doesn’t exist. At least, not technically. The youth worker’s phrase appears in 1 Thessalonians 5:22, but only in the King James Version (KJV) of the Bible. It reads differently in modern translations, but the KJV seems to be unusally popular. If you Google most verses, the number one result is usually the rendering from the New International Version; in this case, the KJV tops the list.

As a child, I never questioned why the phrasing could only be found in one nearly 500-year-old rendering or why the Epistles would command something so utterly irreconcilable with the life and ministry of Jesus. My elders believed it, so I accepted it as gospel truth. Who was I to argue with God’s word?

It was the most oppressive verse I could imagine, promoting a cloistered life that was hermetically sealed off from any people or places or activities that any onlooker might raise a brow over. It created squishy boundaries where nearly everything except going to church was morally suspect. As a result, I drove myself mad by perpetually self-evaluating what other people might be thinking of me. If a restaurant’s dining room was full, I refused to sit at the bar lest someone think I was palling around with riff-raff. I wasn’t to be seen outside a theater hanging with “the wrong crowd,” because, well, there was some saying about birds of a feather that prohibited it. Earrings on a man meant he had questionable sexuality, a bottle of wine on the dinner table meant the diners might be alcoholics, a boy and a girl caught in a room alone together meant they probably just got freaky.

Most scholars now agree that the proper translation of 1 Thessalonians 5:22 is something like, “avoid every kind of evil.” Or more directly from the Greek, “No matter what form evil takes, abstain from it.” Rather than yoking Christians, the passage liberates them to live in healthier life-rhythms and “hold fast to that which is good” (vv.21-22).

Many well-meaning pastors and parents favored this one mistranslation as they sought to protect their children and/or congregants. Others simply cherry-picked. Mistranslation leads to misapplication, but too few Christians do their homework when it comes to the Bible. Instead, many exhibit a dangerous tendency among many Christians and churches today: ignoring any translations or interpretations except those that support one’s predetermined viewpoint.

Another example of this tendency is seen in 1 Corinthians 6:19:

“Do you not know that your bodies are temples of the Holy Spirit, who is in you, whom you have received from God? You are not your own” (NIV)

The problem in this verse is due to a shortcoming in the English language. Unlike Biblical Greek, which can differentiate between the plural and singular forms of “you,” English just gives us the one word and we’re left to guess which is the case here. Unfortunately, some culturally conservative Christians have guessed wrongly. In the Greek, the you is plural and the temple is singular.

“Paul is saying, ‘All of you together are a singular temple for the Holy Spirit,” write E. Randolph Richards and Brandon J. O’Brien in a book I highly recommend, Misreading the Scripture with Western Eyes. “God doesn’t have billions of temples scattered around. Together we make the dwelling for the Spirit.”

Favoring a mistranslation here takes us down the same path as the first one. As Richards and O’Brien note, if you accept the popular mistranslation, the application might be, “I need to quit smoking.” If you do your homework, the application is that faith communities should behave and operate in ways that would please God.

This verse isn’t about policing individual behaviors, but rather about the nature of the Church collectively. Paul is saying, as I’ve heard some put it, “While in the Old Testament, God had a temple for his people; In the New Testament, God has a people for his temple.”

What’s my point? Not that we all need to be experts in Biblical Greek—I’ve probably learned less Greek than some of my readers have forgotten—but we do need to do our due diligence when it comes to the Bible. We need to learn to hold our interpretations loosely, recognizing there’s often more to the text than meets the eye. I suspect there are many more verses like these floating around that are being used by some to bludgeon fellow God-followers.

The more I read the Bible, the more I find it liberates rather than oppresses those who choose to live by it. And the more I follow Jesus, the more I believe He wants us to live liberated rather than oppressed lives. Following Jesus is nothing if not an embrace of freedom (Jn 8:32; Jn 8;36; Gal 5:12; 2 Cor 3:17). Jesus is better than we imagined because he shatters our strivings for sterility with a radical invitation to live free. Free from unhealthy, unjust, sinful patterns, yes. But also free from moralism, free from legalism, and free from condemnation.

Rather than obsess over appearances, let’s focus on leaning into the lives of freedom that are ours for the taking. Too many Christians are languishing in self-made, religious prisons when their cell door has already been opened by Another on the outside. 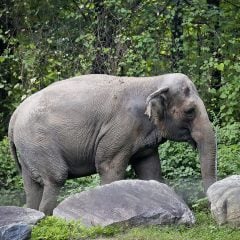