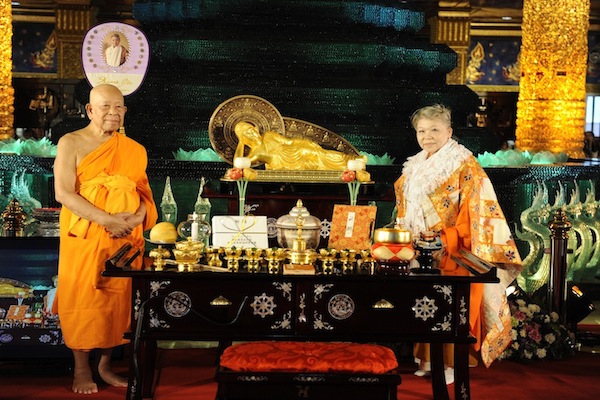 Photo Caption: During the ceremony, Her Holiness Shinso Ito presented the Most Venerable Somdet Phra Maha Ratchamangkhlachan with a statue of Shakyamuni Buddha sculpted by Shinnyo-en’s founder, Master Shinjo Ito. The reclining Buddha or nirvana statue serves as Shinnyo-en’s principal figure of meditation and contemplation.

April 25, 2013, Bangkok, Thailand — Today Her Holiness Shinso Ito, Head Priest of Shinnyo-en, a Japanese Buddhist denomination, became the first female priest to lead a Mahayana prayer ceremony at Wat Paknam, a well-known Theravada Buddhist temple. Her Holiness Shinso Ito is one of the few women to be granted the title of diasojo, the highest priestly rank in Japanese Buddhism. She is also the first woman ever to officiate at a Buddhist ceremony at the Daigoji Monastery in the 1,100 year history of the temple in Japan.

This unprecedented ritual at Wat Paknam was conducted at the special invitation of the Most Venerable Somdet Phra Maha Ratchamangkhlachan, the acting Supreme Patriarch of Thailand and Chief Abbot of Wat Paknam monastery. The ceremony demonstrated the great respect and friendship between these two major schools of Buddhism and aimed to inspire others. Shinnyo-en has a special relationship with Thailand and Wat Paknam Temple.

In honor of the dedication and prayer ceremony, Her Holiness Shinso Ito presented the Most Venerable Somdet Phra Maha Ratchamangkhlachan with a statue of Shakyamuni Buddha entering final nirvana. The reclining Buddha statue, measuring 80 centimetres, was sculpted by Shinnyo-en’s founder, Master Shinjo Ito. He had first presented one of his sculpted reclining Buddha statues to Wat Paknam in 1966 after representatives from Thailand had gifted Buddha relics to Shinnyo-en. Since then Shinnyo-en has held strong relations with Theravada Buddhism.

“An individual’s spiritual wellness and harmony among different spiritual communities serve as a foundation to promote positive social transformation and peace-building. In Asia, there is an urgent need to foster and advance mutual respect and understanding among different spiritual traditions. I believe this prayer ceremony symbolically demonstrates a new beginning of a much deeper and broader collaboration, particularly between Mahayana and Theravada Buddhism,” said Rev. Minoru Shitara, Director of International Affairs for Shinnyo-en.

Under Her Holiness Shinso Ito’s leadership and vision, Shinnyo-en has created and shared Buddhist ceremonies in international, interfaith and multicultural settings with the focus of bringing benefit to the wider society. Shinnyo-en has centers in more than 15 countries around the world, and its members form an inclusive spiritual community of people from all walks of life and religious traditions. Shinnyo Buddhism teaches that anyone regardless of gender, race, ethnicity or religious tradition has the potential to awaken to his or her buddha nature to attain enlightenment.

Shinnyo-en is an international Buddhist community dedicated to helping people realize greater self-awareness, happiness, and harmony for the good of humanity. Shinnyo Buddhism is inspired by and rooted in the Mahayana Nirvana Sutra, the last teachings of the Buddha, which emphasize the ability of anyone to achieve enlightenment. Shinnyo-en helps people from all backgrounds and faiths to cultivate their true self or “buddha nature” through guided meditation, service and the application of Buddhist principles in everyday life.

Shinnyo-en began in 1936 as a community within Shingon Buddhism, a lineage started in Japan more than 1,100 years ago. Shinnyo-en’s founder, Master Shinjo Ito, was trained in the Shingon Buddhist Daigo School and worked to adapt the practice made available to monks. Shinnyo-en branched off as an independent denomination in the 1940s.

About Her Holiness Shinso Ito

Her Holiness Shinso Ito (born April 25, 1942), the Head Priest of Shinnyo-en, embodies the principles of Shinnyo Buddhism and leads the community of close to one million practitioners.  Shinso Ito trained under Master Shinjo, Founder of Shinnyo-en, and is one of his few disciples who completed the Shinnyo Samaya Rite. When Shinjo Ito passed away in 1989, Shinso Ito became his successor.  She is one of the few women to be granted the title of daisojo, the highest priestly rank in Japanese Buddhism.

Shinso Ito is a pioneer in expressing ancient spiritual teachings in an authentic way relevant and meaningful to people today. She has widely promoted ceremonies and activities throughout the world on an inter-religious and cross-cultural scale. Shinso Ito places an emphasis on conducting events through collaborating with people of different religious and cultural backgrounds as a means to deepen mutual understanding and work towards building a more peaceful society. Her leadership highlights Shinnyo-en’s commitment to harmony and equality and the teaching that anyone regardless of gender, race, ethnicity, or religious tradition has the potential to attain enlightenment.

Shinso Ito’s friendship with the current abbot of Wat Paknam, Somdej Phra Maha Ratchamangkalajarn, started ever since they first met in 1970. Her long-standing efforts to foster relations with Theravada Buddhism have earned her an honorary doctorate from Mahachulalongkornrajavidyalaya University in 2002.