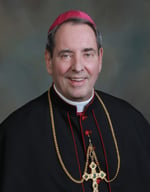 A week after John J. Myers was installed as archbishop of Newark in October of 2001, a priest of the archdiocese named Michael Fugee was indicted for groping a 14-year-old boy the previous year. In April of 2003, Fugee, who had admitted abusing the boy, was convicted of aggravated criminal sexual contact and sentenced to five years’ probation, community service, and psychological counseling. He was also required to register as a sex offender and to receive community supervision for the rest of his life.

In the meantime, Myers, possessor of a doctorate in canon law, was appointed to serve on the Ad Hoc Committee on Sexual Abuse of the US Conference of Catholic Bishops, which drafted the bishops’ Charter for the Protection of Children and Young People, first approved in 2002. The document provides that “for even a single act of sexual abuse of a minor whenever it occurred which is admitted or established after an appropriate process in accord with canon law, the offending priest or deacon is to be permanently removed from ministry.”

In 2006, Fugee’s conviction was overturned on a technicality. Rather than retry the case, the district attorney entered into an agreement with the archdiocese stipulating that the archdiocese

shall not assign or otherwise place Michael Fugee in any position within the Archdiocese that allows him to have any unsupervised contact with or to minister to any minor/child under the age of 18 or work in any position in which children are involved. This includes, but is not limited to, presiding over a parish, involvement with a youth group, religious education/parochial school, CCD, confessions with children, youth choir, youth retreats and day care.

In an interview with the Star Ledger in 2007, Myers stated: “At this time there is no person, whether priest, religious or layperson, on assignment in the archdiocese against whom there have been substantiated accusations of sexual abuse. As per our agreement with state officials, all accusations are referred to county prosecutors and we cooperate with them as they judge best.”

Then, in 2009, Myers appointed Fugee chaplain of St. Michael’s Medical Center in Newark, where he had access to patients and visitors, including children, without informing the hospital of the legal restrictions on the priest. Fugee was let go only after a Star Ledger reporter started asking questions.

Myers also appointed Fugee director of the archdiocesan Office for the Propagation of the Faith and, earlier this year, co-director of the Office of Continuing Education and Ongoing Formation of Priests. When that appointment created a stir, Myers wrote a letter to his priests informing them that he had decided to return Fugee to ministry after the archdiocesan review board had determined that no abuse had occurred.

It now turns out that Fugee has also, with Myers’ permission, been doing what the 2006 agreement said he could not. Investigative reporting by the Star Ledger‘s Mark Mueller reveals that Fugee has gone on youth retreats and trips, and heard children’s confessions.

This has not been denied by the archdiocese. To the contrary, Myers’ spokesman told Mueller that “the archdiocese has interpreted the document to mean Fugee could work with minors as long as he is under the supervision of priests or lay ministers who have knowledge of his past and of the conditions in the agreement.” He also told Mueller that the review board’s finding that no abuse took place had been forwarded to, and received the concurrence of, the Congregation for the Doctrine of the Faith in Rome.

There is no doubt that Myers has violated the 2006 agreement, which is nothing other than an acknowledgment that Fugee is a sex offender. It is appalling that the archbishop should have engaged his review board to come to a different conclusion, as if the agreement did not exist, and then got the sign-off from Rome to return Fugee to ministry in order to wiggle out of the mandate of the Charter he helped write.

Fugee is one of four priests shielded by Myers who have either admitted to or been found guilty of sexual abuse, or who have been permanently barred from ministry, according to the Star Ledger. On Sunday, the newspaper called for his resignation. Yesterday, Rev. James Connell, a former vice chancellor of the Archdiocese of Milwaukee and an advocate for abuse victims, formally asked the Congregation for the Doctrine of the Faith to look into whether Myers had violated canon law in his handling of the Fugee case.

The new revelation about Fugee presents Pope Francis with his first case of a bishop providing an abusive priest with continued opportunities to abuse minors. How Rome handles it, whether by action or inaction, will send a signal around the world. In the long night of the Church abuse scandal will this papacy be a new day, or a false dawn?