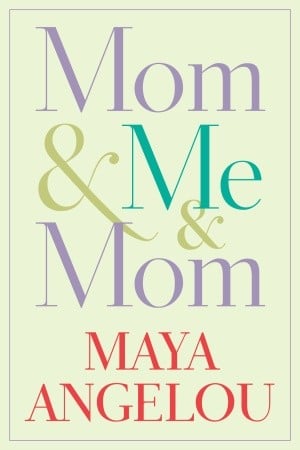 I once (almost not quite) met Maya Angelou.

I was in Atlanta having lunch with a publisher at the Ritz-Carlton Hotel. (It was lovely, and they had the best strawberry shortcake I have ever eaten, but that's not the point of the story so I promise I will stop discussing the food now.)

At one point I became aware of a very tall African-American woman in a white suit walking past our table to go to the restroom.

When she made her way back a few minutes later, I saw her beautiful face and knew this was Maya Angelou. She saw me staring at her, and as she passed by she smiled very beautifully, touched my shoulder, and murmured something. I felt blessed!

Recently I had the pleasure of reading Angelou's latest book, Mom & Me & Mom, a brief memoir of the woman who did and did not raise her. For her early years Angelou and her beloved brother Bailey both lived with their grandmother in Arkansas. In the book, she does not particularly detail why her mother who lived in California was not raising her children herself. Later, when Angelou was a little older and her brother was becoming too saucy growing up as a black boy in the south, Angelou’s grandmother worried that Bailey might get into trouble in a racist society. So she headed to California to reunite the children with their biological mother, whom Angelou barely knew.

Angelou was stunned by her mother’s physical beauty. But she felt awkward in her presence, determined to exhibit coldness to the woman who seemed to have rejected her and her brother. She was incensed when her brother welcomed their mother with total delight and love. Angelou was so guarded with her own love that she would not call her mother mom or mother, but Lady.

Lady Baxter was quite a woman: she was a successful business owner, having invested in a gambling house and at least one hotel. She was a nurse, a real estate agent, and a member of the Eastern Star. She was always packing heat, with an undercurrent of violence evident several times throughout the book, including when Lady encouraged Angelou to gun down a man who had once beaten her.

And Lady was fearless. When Angelou was poised to embark on a literary career and take her son to New York, she was surprised to find that her mother, too, was leaving California.

“I am going to be a seaman,” her mother told her. Apparently Lady decided upon this unusual course of action late in life simply because she had been told that no women were allowed to join the seamen’s union. She was determined to put her entire leg in that door, thereby opening it for other women.

As she became a successful adult, Maya Angelou’s deep respect for her mother grew. It was not always a cozy relationship, but it was a passionate one. As her literary star was rising, Angelou went to Sweden where a film was being made of one of her books – the first novel by an African-American woman to ever be adapted for the screen. But when she arrived in Sweden, she found that nothing was as promised. She was treated badly and only allowed to stay on the set to dress the hair of the African-American actors, presumably because no one else knew how to do it.

After some weeks of this shoddy treatment, Angelou called her mother. Lady immediately got on a plane to Stockholm. People began treating Angelou with more respect, not because Lady came to the set or harassed anyone or waved her gun around (all of which, I think, she would have been capable of), but because Lady’s mere presence caused Angelou to treat herself with more dignity. This cool confidence was apparent to the people around her.

Here’s one thing I took away from the memoir. We often regard early childhood as the most important time for us to have a mother’s presence and care, and that certainly is a crucial season. But as Angelou’s memoir suggests, we never really outgrow that need. Since my mom passed away in January, I’ve felt keenly that I’ve lost one of my greatest supporters, who was still teaching me and cheering for me throughout my adulthood. Mom always had my back.

I can never repay that enduring love, but on this Mother’s Day – this very difficult first Mother’s Day without Mom – I can be grateful for it, and endeavor to pass it on.

Thanks, Mom. I love and miss you.