VATICAN CITY (RNS) Gains in Asia and Africa are making up for losses in Europe among the world's 1.2 billion Catholics, according to Vatican statistics released Monday (May 13), signaling a shift of the church's center of gravity toward the Global South that was heralded by the election of the first Latin American pope. 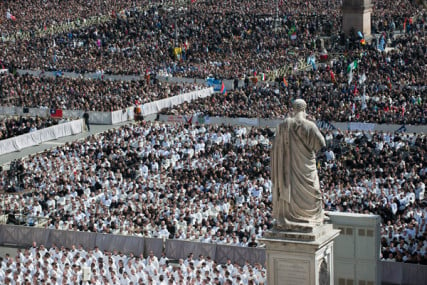 Data published in the 2013 Statistical Yearbook of the Church also show that while the number of priests in the Americas and in Europe is declining compared to the overall Catholic population, those losses were offset by increasing ranks of permanent deacons.

There are now about 41,000 permanent deacons worldwide, a 40 percent increase over the past decade. The vast majority of them -- 97.4 percent -- live in the Americas or in Europe.

According to Maureen Tilley of Fordham University, the diaconate is becoming increasingly appealing to “older ‘second-career’ men,” as younger men remain reluctant to take the vow of celibacy required by the priesthood.

“The number of second-career vocations has been booming not just among Catholics but also among U.S. Protestants,” she said.

Moreover, according to Tilley, high unemployment may be another factor, leading men to consider a “broader variety of vocations such as volunteer service including a call to the diaconate.”

According to Vatican data, the Catholic population worldwide surpassed 1.2 billion in 2011.

But while growth in the Americas and Europe mirrored the growth of the general population, Catholic growth in Africa and Asia was almost double the regions' population growth.

The world's 413,418 priests at the end of 2011 showed a slight increase from the previous year, continuing a trend of slow growth that began in 2000 after decades of decline.

A rapid increase in vocations in Africa and Asia -- to the tune of more than 3,000 new priests in a year -- balanced the shrinking ranks of the priesthood in Europe. In the Americas, the number of priests remained stable.