WASHINGTON (RNS) Twenty-five top Christian leaders gathered in the U.S. city with perhaps the worst reputation for civil discourse Wednesday (May 15) and committed themselves to elevating the level of public conversation.

Meeting in a row house three blocks from the U.S. Capitol, the group spanned the Christian spectrum, and included officials from liberal churches and the most conservative of interest groups. 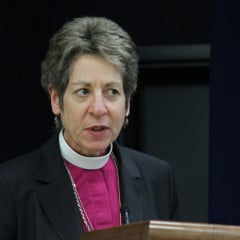 “The ground of our spiritual understanding is in treating other people as the image of God, treating people with respect,” said Episcopal Presiding Bishop Katharine Jefferts Schori.

“Faith leaders have a remarkable opportunity to shift the conversation, but it’s very challenging, particularly in a larger society that wants to understand everything as a battle, as engaging the enemy, rather than with someone who might have something to teach us,” she said.

The “Faith, Politics and Our Better Angels: A Christian Dialogue to Promote Civility” forum convened for the first time last year.

As religious leaders, they agreed, they are called to move politicians, congregants and Americans in general to understand that mean-spirited debate makes it all the harder to solve the nation’s problems.

Sometimes, they said, that may mean calling out people – including themselves – who debate disrespectfully through name-calling or by questioning the motives of their political opponents.

“Everyone says they’re in favor of civil discourse, but the lack of civility seems to win elections,” said Ed Stetzer, vice president of research and ministry development at LifeWay Christian Resources.

“You need some voice to say, ‘OK, we get that it can win elections, but maybe that’s not the best course of action.’ Typically, we think of religious leaders as voices of conscience, calling people to a better way. So therein is the hope,” Stetzer said.

One idea the group is considering, Cooper said, is a national day of civil discourse — perhaps in January, as people are making New Year’s resolutions — when preachers across the country will ask their congregants to make respectful conversation a priority in their lives.

News
Jennifer Hudson: Their shared faith ‘definitely’ helped her depict Aretha Franklin in ‘Respect’
Follow us on Facebook!
Submit your photos to RNS