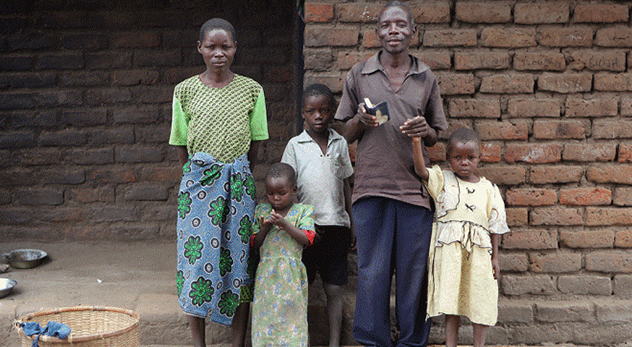 Maxwell and Mcuzi of Malawi aren't able to feed their family of five because of environmental degradation - image courtesy of Clive Mear, Red & Green Marketing.
May 15, 2013
Jonathan Merritt

Maxwell and Mcuzi of Malawi aren't able to feed their family of five because of environmental degradation - image courtesy of Clive Mear, Red & Green Marketing.

I’d tried to explain to my dad that I was only kidding—a common excuse given by children who’ve been caught red-handed—but he was quick to reply, “Son, some things just aren’t funny.” This week, I’ve been reminded anew of the truth of his words.

On Monday, I penned a column entitled, “Is Mark Driscoll this generation’s Pat Robertson?” that referenced some of the more controversial statements of both men. The introduction to the story centered on a recent comment made by Pastor Mark at the Catalyst Conference in Dallas, Texas where he remarked that he drove an SUV because God was going to burn up the Earth anyway.

I was careful not to address the character of either preacher in the article. My assumption is that both men are, for the most part, well meaning even if their words don’t always express the intentions of their hearts. Instead, I hoped to begin what I believe is a much-needed conversation on the prudence of rhetoric.

Apparently, the article did not go unnoticed. I had a lively conversation with the Communications Director at Mars Hills Church and then Pastor Mark posted an article addressing the Catalyst comment.

“I told some jokes,” Driscoll said of his talk. “People knew they were jokes, as the laughter was loud enough to hear with the ears God specially designed in part for listening to jokes.”

Upon reading this, my mind returned to the moment I’d first received word of his comment. I was sitting on a rough-hewn bench in Malawi, talking to a Christian family who are suffering the effects of environmental devastation. The soil will only produce enough food for eight months, and they don’t know how they’ll survive the latter part of this year. I wonder if they’d think the joke was funny.

I thought of the man I’d met in the Appalachian region of the United States whose life has been devastated by mountaintop removal coal mining. I stood on his porch while he sobbed uncontrollably. The coal industry’s practices have polluted their community’s water sources, and they are now experiencing higher-than-normal rates of cervical, colorectal, and lung cancer and increased mortality. I wonder if he’d think the joke was funny.

I think of my 5-year-old nephew who is showing the early signs of asthma. Our city, like many in the United States, is experiencing record high levels of childhood asthma as a likely result of air pollution. I’m certain his parents wouldn’t think the joke was funny.

“Like a maniac shooting flaming arrows of death,” the book of Proverbs reminds, “is one who deceives his neighbor and says, ‘I was only joking.’”

Solomon knew something we often fail to comprehend as children and refuse to learn as adults: language can hurt people. And when someone harms others with their rhetoric, claiming they were only joking isn’t all that helpful. After all, some things just aren’t funny.

The lesson here does not seem to be that every one needs to lighten up, but rather that we—all of us, myself included—need to be wise in the words we choose. Speech is one way we love our neighbors and demonstrate our care for the “least of these” who often don’t have the luxury of joking about such things. If we refuse to learn this lesson, we’re likely to lose credibility. For when one chooses to repeatedly make serious issues into laughing matters, the comedian becomes the punch line.