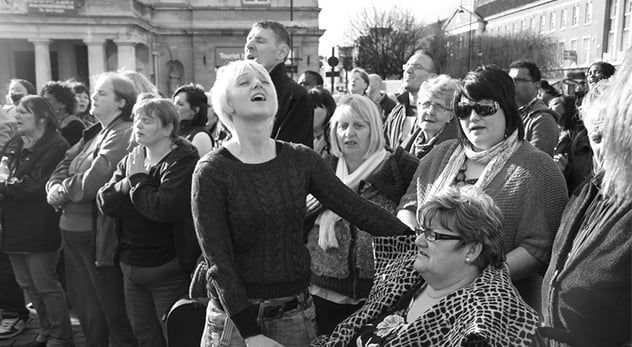 Children are notorious for spreading germs and sickness. But what happens when a seriously ill child’s parents are faith healers who don’t believe in medicine? The answer is, they die.

In 2009, Herbert and Catherine Schaible’s two-year-old son Kent died of pneumonia after being sick for about two weeks. The parents, who failed to seek medical care due to their religious beliefs, were convicted of manslaughter and child endangerment. Rather than slapping them with a prison sentence, the court placed the parents on probation and ordered them to seek medical care in the future if their children needed it.

Predictably, the Schaible’s ignored the court order and now a second son, 18-month old Brandon, has also died in circumstances that Assistant District Attorney Joanne Pescatore described as “eerily similar.” The couple has been charged with third-degree murder and, according to The Associated Press, could face up to 14 years or more in prison if convicted.

The Schaible’s are members of the fundamentalist First Century Gospel Church in Philadelphia, PA. Articles on the church’s website claim that purchasing any type of insurance “is against the principles of Bible teaching and practice.” Sermons for download focus on the topics such as the evils of Halloween and Gambling, and ironically, the danger of false teachers.

One sermon titled, “Healing – From God or Medicine?”, uses a litany of verses purportedly forbidding Christians from using medicine.

“A minister who claims to teach from the Bible, but goes to a hospital for medical help, is not trusting God in faith on the Blood sacrifice of His Son. The minister’s decision reveals his serious lack of faith,” the preacher proclaims in the aforementioned sermon. “To preach that Jesus came to save us, but not to heal us, is false teaching—and we are to watch out for false prophets.”

One can’t help but wonder if First Century Gospel Church’s pastor is himself the kind of false prophet he warns against. After all, the congregation and its mother church, Faith Tabernacle Congregation, have been responsible for the deaths of at least 22 children.

Though most Christians presumably eschew the Schaible’s theological views regarding medical care, some will attempt to defend them on the grounds of religious freedom. But Shawn Francis Peters, author of When Prayer Fails: Faith Healing, Children, and the Law and University of Wisconsin professor, says this argument will not stand.

“Throughout history, there have always been limits placed on religious liberty and all our constitutional freedoms. The courts have never given people unlimited religious freedoms,” he told me. “They’ve always balanced it with public order, the rights of minor children, and other things.”

Peters says this case won’t likely set judicial precedence because of the murky laws in many states governing whether parents can use religious practices in lieu of medicine and the sympathy typically extended by courts to misguided parents who seemingly love their children.

But when asked if the Schaibles should go to jail, he offers and unequivocal yes: “They were clearly warned not to let this happen again. It may be uncomfortable to enforce the law against people who seem sincere, but I think that they have to go to jail.”

Sadly, however, Peters says their imprisonment won’t solve the problem.

“Lots of people, like the Schaibles, don’t care about the law. They are going to do what they believe is right regardless, so putting them in jail won’t deter future offenders and it hasn’t historically,” he says. “And when someone thinks that the State is some sort of extension of the Antichrist, then penalizing someone like them can actually reinforce your ideas. It won’t cause you to reflect.”

Peters says that since people won’t be coerced with the law in these matters, other congregations and community leaders must begin engaging those who hold these sorts of views and help guide them in reconciling their convictions with medical science. Civic dialogue and education seems to be at least a partial answer to addressing these matters in the long term, but that doesn't settle the case before us.

The fact remains that the Schaible's beliefs directly resulted in the death of not one, but two children. People who misapply the Bible at their own detriment is one thing, but endangering a child is another matter altogether. The Schaibles need to go to jail, and so should any other misguided faith healer whose beliefs result in another's death. As I’ve said before, the ocean of religious liberty must stop at the shore of child welfare. Faith healers who endanger children should be placed on alert: You can believe whatever you wish, but if those beliefs result in the death of a child, you will go to jail.