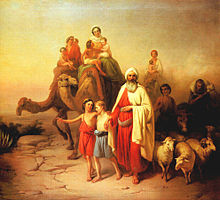 Over at First Thoughts, they're thinking again about the question. Baylor historian Thomas Kidd has re-posted his review of Yale theologian Miroslav Volf's 2011 book, Allah: A Christian Response. And Roanoke theologian Gerald McDermott has weighed in.

Volf's answer is yes. Kidd and McDermott say no. To be sure, they all agree that the God in question is identified by Christians and Muslims, and Jews too, as the God of Abraham. The debate comes down to whether the religions have sufficiently common conceptions of Abraham's God and what that God requires of us. Volf argues that Muslims share Christians' core obligations to love God and one's neighbor. Kidd and McDermott don't think so.

We could, of course, have a discussion about whether Jews worship the same God as Christians and/or Muslims. And some would say yes; others, no. The problem, however, is that it's a question that baits its audience with the possibility of different god-beings, then switches to finer points of doctrine.

Plus, in the present case, it's all about the politics of religious conflict. Kidd gives the game away at the beginning of his review:

President George W. Bush created a boiling controversy amongst Evangelicals in 2003 when he declared that Christians and Muslims worship the same God. Many accused Bush of pandering to political correctness.

Do Christians and Muslims worship the same God? Since the devastating attacks of 9/11—when the world saw afresh that religion has geo-political consequences, and that Islam is the most volatile religion on the world’s stage—more and more Christians have been asking this question.

The idea seems to be that if we acknowledge that we worship the same God as the people who attacked us, we'll be less likely to consider them a hostile Other. And if we insist on the contrary, then we're free to scrutinize the teachings of the alien god for the malevolence we expect from sworn enemies.

History tends to give the lie to this idea. Consider the wars between Catholics and Protestants in Early Modern Europe or Northern Ireland, or the contemporary civil wars between Shiites and Sunnis in Iraq and Syria. As Lincoln, in his Second Inaugural, said of the Union and the Confederacy, "Both read the same Bible and pray to the same God, and each invokes His aid against the other."

When it comes to armed conflict, worshiping the same God counts for nothing.