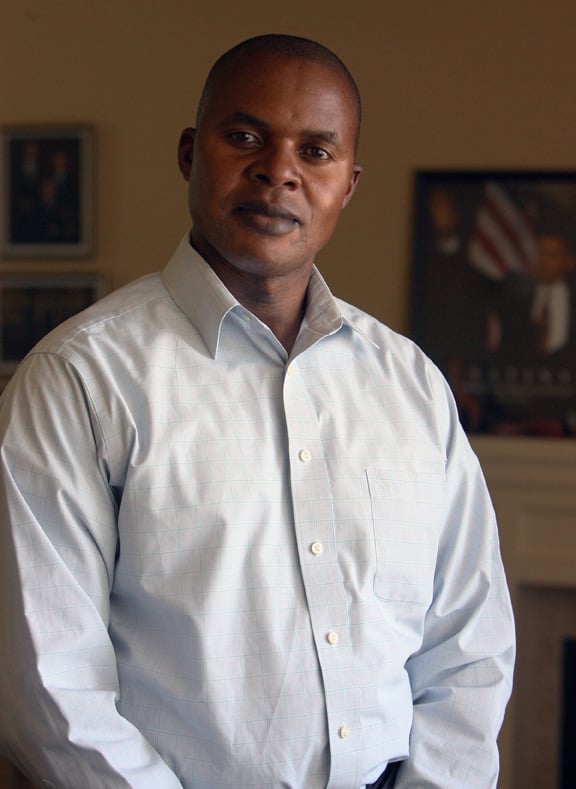 Amram Musungu, a Mormon from Kenya, is a leader in Swahili Mormon ward in Salt Lake City but says the church still has lingering prejudice, even 35 years after it lifted the ban on blacks entering the priesthood. RNS photo courtesy Steve Griffin | The Salt Lake Tribune.
June 7, 2013
Peggy Fletcher Stack

SALT LAKE CITY (RNS) June 8, 1978, was a sacred, momentous event — a revelation — that catapulted Mormonism into a new era of global growth.

On that day, the Church of Jesus Christ of Latter-day Saints ended its ban on blacks in its priesthood, opening ordination to “all worthy male members,” including those of African descent.

“For me,” former church President Gordon B. Hinckley said on the day’s 10th anniversary, “it felt as if a conduit opened between the heavenly throne and the kneeling, pleading prophet of God who was joined by his brethren.”

Amram Musungu, a Mormon from Kenya, is a leader in Swahili Mormon ward in Salt Lake City but says the church still has lingering prejudice, even 35 years after it lifted the ban on blacks entering the priesthood. RNS photo courtesy Steve Griffin | The Salt Lake Tribune.

In the 35 years since the announcement, Mormonism has spread exponentially in areas formerly off-limits, especially Africa.

There now are nearly 400,000 Mormons in Africa, two missionary training centers, three working temples (South Africa, Ghana, and Nigeria), with two more planned (Democratic Republic of the Congo and another in South Africa).

Brazil, with its heritage of mixed races, has been especially fertile territory, with 1.2 million Mormons. In Europe, many of those willing to listen to Mormon missionaries are African immigrants. And the church is growing steadily in urban America, home to millions of African-Americans.

For most white Mormons, the historical controversy is over. “It’s behind us,” Hinckley told “60 Minutes” in 1995. But the ban still haunts many African-American members. They frequently have to explain themselves and their beliefs to non-Mormons, other black converts, even themselves.

They occasionally hear racist comments from fellow believers, such as “black skin is cursed” or “when you become more righteous, your skin will grow lighter.” Some report being called the “N-word.”

Such racist remarks exist in every faith and group, of course, but some Latter-day Saints see the persistence as troubling.

“Thirty-five years after the end of a racial restriction that had so burdened the church,” said Armand Mauss, a pre-eminent Mormon sociologist, “the old racist folklore that came with it has still not been formally repudiated" by top church leaders.

Most Mormons did not challenge the ban on black males in the priesthood, but they did want to know why God would institute such a policy. Various explanations, many culled from American culture at the time, emerged.

Some LDS leaders, including then-apostle Bruce R. McConkie, taught that black skin was “the curse of Cain,” an allusion to the biblical figure who killed his brother Abel. Others added the notion that blacks were “less valiant” in Mormon theology's “premortal existence.”

The official position is that only God knows the reason for the 125-year ban, and only a revelation from God could end it.

The blacks-as-cursed belief continues to be circulated at the grass-roots level and supported in publications such as McConkie’s "The Mortal Messiah" and former LDS prophet Joseph Fielding Smith’s "Doctrines of Salvation."

Last year, after Brigham Young University religion professor Randy Bott was quoted in the press describing those racist theories, the church issued a strong condemnation of the so-called “folklore.”

"The church’s position is clear — we believe all people are God’s children and are equal in his eyes and in the church," the statement said. "We do not tolerate racism in any form.”

Dalyn Montgomery, a white Latter-day Saint married to a black convert in Philadelphia, believes he knows what to credit for the progress: Mormonism’s structure.

Throughout U.S. history, the most segregated day of the week has been Sunday. Worshippers often divide along racial lines, attending churches with people who look like themselves. But Mormonism doesn’t allow that, Montgomery said.

“Because of its lay ministry, everybody has to work together to make Sundays run. In any geography that captures both (black and white) races, people are forced to spend time together on leadership councils and in each other’s homes.”

In places such as Philadelphia and Atlanta, he said, a young, white, highly educated family and an older African-American woman of little means “are in each other’s homes, meeting in meaningful ways on something — faith — that matters to both of them.”

Even so, challenges remain. Church-owned BYU has 30,000 students and 1,226 professors, but only 254 black students and one full-time black faculty member.

For Josy Petit, a black BYU graduate from Queens, N.Y., who has been a Mormon since she was 8, being on the largely white campus helped her develop “a sense of humor — and ready answers” when confronted with insensitive comments and false assumptions.

“Even though they knew I was a top performing student, some of my professors just saw a black person,” she recalled. “Some of the nicer teachers asked me, ‘What sports do you play?’”

She got engaged to a white Mormon but had to call it off, she said, “because his family couldn’t get over the fact that I was black.”

Petit believes such prejudice is based on the former ban and continues to fester within Mormonism because members are uncomfortable talking about it.

“I wish (LDS leaders) had more confidence in their doctrine and that the Holy Ghost testifies of truth. Black members could be presented the historic information and still choose to stay, like I did, because of all the good there is in the church. Truth will carry them through.”

Amram Musungu joined the LDS church in 1992 as a 14-year-old living in Nairobi, Kenya, and within three years served a full-time mission in his homeland.

Now living in Utah, Musungu is married with two children, works as an accountant, sings in the Mormon Tabernacle Choir and helps lead a burgeoning, 300-member Swahili ward in Salt Lake City.

He doesn’t care about the former priesthood ban.

“Everyone asks why, why, why it didn’t happen sooner,” Musungu said. “We don’t know. We are just rejoicing at our opportunity to hold the priesthood and bless the lives of our families.”

Even Musungu, though, has experienced the sting of racist comments. Once, when he was introduced as being a Mormon from Africa who sings in the choir, another church member asked: “What are you doing in our world?”

Stunned, the gentle African replied, “We are brothers and sisters, and this world belongs to all of us.”