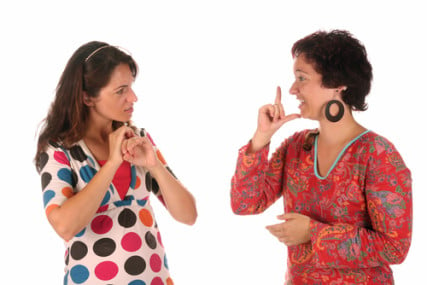 Deaf people have no sign language Bible, but a group in Japan wants to change that. Image of deaf people conversing courtesy of Vladimir Mucibabic via Shutterstock

We begin today on the international front where news is sober:

Blasphemy cases were once rare in Egypt, but their frequency has increased sharply since the revolution. More than two dozen cases have gone to trial, and nearly all defendants have been found guilty, according to The New York Times. Most blasphemy cases have been directed against Egypt’s Christian minority and filed by ultraconservative Muslims known as Salafis.

Thomas Friedman notes that the protesters in Turkey’s Taksim Square aren’t trying to throw out their democratically elected Islamist prime minister, Recep Tayyip Erdogan. What they’re doing is calling him out. They want greater religious freedom at a time when Erdogan has been telling them where and when they can drink alcohol, how many children each woman should have (3), and why abortions should be banned.

A candidate for chief rabbi of Israel was shoved and verbally attacked by ultra-Orthodox teens who apparently don’t view him as religious enough.

Russia will prohibit adoption by same-sex couples whose homeland recognizes their union as marriage, as well as by single people or unmarried couples from those countries. It has already banned American adoptions.

And finally some levity from overseas: Against all expectations, the pope’s Twitter account in Latin has gained more than 100,000 followers in six months and continues to grow, NPR reports. When the Latin account was launched in January, Vatican officials expected 5,000 Latin followers. But by May, it had surpassed Polish and was in a tie with German. Go figure.

Back on the homefront: The New York Civil Liberties Union filed a lawsuit against the New York Police Department over its surveillance of Muslim communities, accusing the police of trampling on religious freedoms and constitutional guarantees of equality.

Ace religion reporter Rachel Zoll reports that the Capuchin Franciscan Province of St. Joseph, which spans 10 Midwestern states, released an unusually candid report outlining how its leaders failed for decades to stop sex abuse in its schools and other ministries.

It’s been 500 years since Martin Luther posted his 95 theses, and Catholics and Lutherans have decided to mark the anniversary (Oct. 31 to be exact) with observances that focus more on what they have in common than what split them apart. Alessandro Speciale reports from Rome.

For the first time, the feds release guidelines for houses of worship on confronting a homicidal gunman. The are new rules for schools and colleges too, and pretty much upend the old “lockdown” theory for the following: “run, hide, fight.” Obviously, this raises a ton of thorny questions about guns and churches.

Speaking of tough questions, the Republican-led U.S. House passed a bill that would ban abortions past 20 weeks of pregnancy, despite reservations within the GOP that their handling of abortion in the 2012 elections hurt more than helped the party.

There is no Bible for the deaf. But the Japan Deaf Evangel Mission is trying to create the world’s only full-text sign language Bible using video-recorded Scriptures. The visual media project, however, could take decades to complete.

While some people saw the “Superman: Man of Steel” movie and decided the super hero was Jewish, Jonathan Merritt notes the plot line — “A father figure from another world sends his only begotten son to Earth who, at 33 years old, must sacrifice himself to save the human race ” — and suggests the producers tried to play up the New Testament parallels to sell more Superman tickets to Christians.

Depictions of the crucifixion are not commanding high prices at auction like they used to, and Menachem Wecker’s RNS story offers some intriguing reasons as to why that might be so— including a growing reluctance to display religious art in the home.

RNS blogger Mark Silk dissects the numbers on that new Pew study that looks at how welcome gay people feel by different denominations.

On the subject of welcome, despite official opposition to same-sex marriage, scores of Catholic colleges and universities now offer some sort of programming, counseling opportunities, or student groups geared specifically for LGBT students, reports Michael O’Loughlin.

Finally, AP reports that the apocalyptic comedy “This is the End” was reshot to include a heavenly conclusion. We won’t spoil it for you, but read the article if you’ve seen the movie.

And this is truly the end, but only of today’s first-ever, jointly written Roundup. Tune in for more tomorrow.

Flunking Sainthood
Retired BYU professor denounces Donald Trump in viral video
© Copyright 2020, Religion News Service. All rights reserved. Use of and/or registration on any portion of this site constitutes acceptance of our User Agreement and Privacy Policy, Privacy Statement and Cookie Notice. The material on this site may not be reproduced, distributed, transmitted, cached or otherwise used, except with the prior written permission of Religion News Service.