WASHINGTON (RNS) When it comes to God and country, white evangelicals report the most intense patriotic feelings in a new poll, with more than two-thirds (68 percent) saying they are extremely proud to be an American. 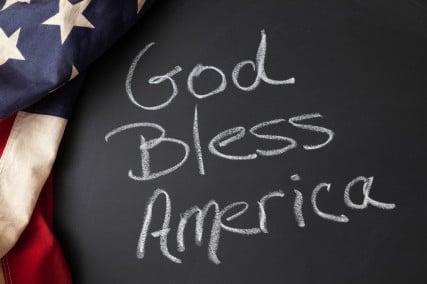 That figure was markedly higher than for white mainline Protestants (56 percent), minority Christians (49 percent), Catholics (48 percent) and religiously unaffiliated Americans (39 percent), according to the study, conducted by the Washington-based Public Religion Research Institute in partnership with Religion News Service.

White evangelicals are also more likely than any other religious group surveyed to believe that God has granted the U.S. a special role in history (84 percent) and to say they will likely attend a public July 4th celebration (62 percent).

On the other end of the spectrum, relatively few religiously unaffiliated Americans believe in a God-given American exceptionalism, (40 percent) or plan to attend a public Independence Day celebration (48 percent).

Eric Metaxas, the popular Christian author and speaker, said evangelicals “are not patriotic and pro-American in a tribalistic, nationalistic, or jingoistic sense.

“But they do tend to be pro-America because they believe that the ideas of the Founders — religious liberty at the head of them — have been a huge blessing to those on our shores – and to those beyond them.”

“Like Gov. Winthrop of the Massachusetts Bay Colony in the 17th century,” Metaxas continued, “evangelicals see America as being blessed by God to be a blessing to others, to be a ‘city on a hill.’ And to the extent that that’s true, they celebrate that.”

But Dan Cox, PRRI’s research director, said the study of 1,007 adults might say as much about cultural and regional differences among Americans as religious distinctions.

“A lot of evangelicals live in the South, and flying a flag from your house or car, and singing the national anthem — not just standing for it — is infused in Southern life,” said Cox.

“In the South and in many rural areas, we see a cultural terrain that is more likely to embrace Americana in ways that people who live outside the South don’t get,” he said.

Similarly, a person’s lack of religiosity doesn’t necessarily signal a lack of patriotism.

Instead, the relative lack of a visible patriotism among the one in five Americans who are religiously unaffiliated may be better explained by their perceptions that they are culturally distinct from the rest of the country, Cox added.

The poll found that unaffiliated Americans are more likely than other religious groups to report that they are very different from the typical American, and Americans who believe they are atypical are also much less likely to say they are extremely patriotic (35 percent) than those who see themselves as typical (59 percent.)

It may also come down to politics: The unaffiliated tend to be liberal, and liberals tend to view their patriotism in different ways than conservatives, who, as the poll shows, are much more likely to embrace public displays of patriotism.

“Many liberals argue that they can be patriotic as they criticize their country, and exercise their First Amendment rights to express dissenting opinion,” Cox added.

In general, the poll found that Americans are proud to be Americans, with eight in 10 reporting that they are extremely (51 percent) or very proud (31 percent).

Asked what makes them proud to be an American, those surveyed said:

About one-third (31 percent) said there has been a time when they were not proud to be an American — the most cited reasons given were the wars in Iraq and Vietnam (29 percent) and poor treatment of minorities and racism (14 percent.)

The study, conducted June 5-9, had a margin of error of plus or minus 3.1 percentage points.