(RNS) Before convening its second annual meeting last month, a fledgling organization of U.S. priests that wants to reform the Catholic Church was tweaked by critics as the last gasp of a dying liberal Catholicism.

But when the members the Association of U.S. Catholic Priests gathered in Seattle on June 24, they wound up adopting fewer than half of the proposals on their agenda and voted down the most controversial item: a call for the church to examine opening the priesthood to women and married men.

The Rev. Dave Cooper, a priest from Milwaukee who heads the 1,000-member AUSCP, said Tuesday (July 2) that the middle course charted by the 140 delegates reflected a goal of promoting dialogue, not laying down markers for a confrontation with the hierarchy.

“We realized that if we hope to dialogue with bishops we have to find bridges to do that,” Cooper said. If the group had adopted the resolution on ordaining women priests – a ban that the Vatican has said is not open for discussion – “it would have become an obstacle, a barrier, rather than a bridge.”

On the other hand, he said, now the group is being criticized by some “who accuse us of a lack of courage.”

Among the six proposals passed by the priests at the three-day AUSCP convention was a resolution urging the church to “exercise … authority in a collegial manner through consensus decision-making processes.” Another expressed support for Pope Francis in his own effort to reform the church, and called for the participation of laity and clergy in the selection of bishops.

Those are hardly cries for revolution. In fact, the most controversial resolutions the priests voted for were a call to ordain women as deacons – an order that ranks below that of the priesthood – and for reintroducing general absolution for forgiving sins rather than restricting the rite of confession to a private one-on-one conversation with a priest. Those proposals have also been supported by a number of bishops.

Besides voting down the proposal to open a discussion about ordaining women and married men as priests, the delegates rejected six other resolutions. One would have asked the U.S. bishops “to work to resolve the problem of (the) precipitous decline” in the number of active priests. Another sought permission to use the 1974 version of the Mass that was recently supplanted by a new translation that has been widely criticized for its stilted language.

The decision not to call for wider use of the 1974 Mass may have been the biggest surprise of the voting.

One of the featured speakers at the gathering was recently retired Bishop Donald Trautman of Erie, Pa., who was a vocal opponent of the new translation during the many years it took for Rome to convince the U.S. hierarchy to adopt the new missal. 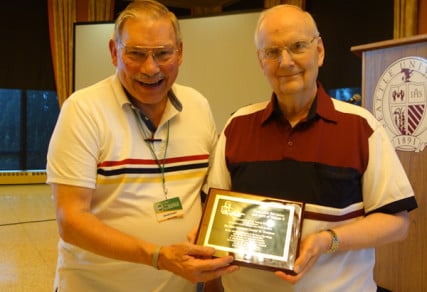 (Left) Fr. Dave Cooper, Milwaukee – AUSCP, Board Chair presents the Blessed John XXIII Award to Bishop Donald W. Trautman (right), Diocese of Erie, PA., for his dedication to the love of the liturgy and for his devotion to priestly and episcopal ministry in the liturgical renewal envisioned by the Second Vatican Council. Photo courtesy Association of US Catholic Priests (AUSCP)

Trautman, who received the group’s Pope John XXIII Award, blasted the new language of the rites as “flawed, awkward and clumsy,” according to a report in National Catholic Reporter.

“Our Lord did not speak above the heads of his hearers. He used the language of the people,” Trautman said. But he also said he was “a pragmatist” and doubted that a call to reinstate the old Mass would have much impact even if the AUSCP passed it.

In his remarks, Trautman reflected the hopes of many in the AUSCP that Francis’ election might signal a return to the values of collegiality and a pastoral approach to ministry that were raised by the Second Vatican Council 50 years ago.

“We have witnessed and endured turning the clock back. We have experienced a lessening of collaboration and dialogue,” Trautman said in a homily at Mass with the delegates.

“Yes, Holy Father, your brothers and co-workers … stand with you and pray that the clocks not be turned back, but ahead. We pray that the church would read the signs of our times and implement the promptings of the Holy Spirit.”