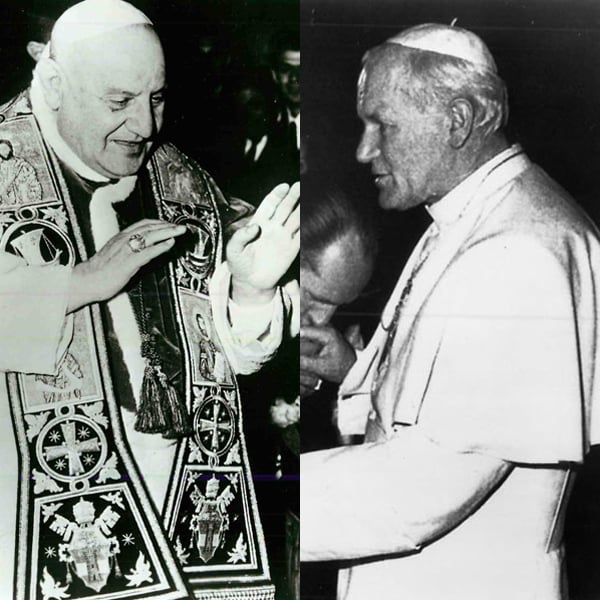 Pope Francis declared on Friday (July 5) that Popes John Paul II (right) and John XXIII (left) will be made saints, elevating the two most decisive popes of the 20th century to the pantheon of Catholic life and worship. Religion News Service file photos
July 5, 2013
Alessandro Speciale

VATICAN CITY (RNS) Pope Francis declared on Friday (July 5) that Popes John Paul II and John XXIII will be made saints, elevating the two most decisive popes of the 20th century to the pantheon of Catholic life and worship. 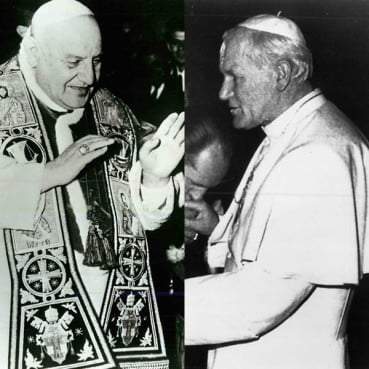 Pope Francis declared on Friday (July 5) that Popes John Paul II (right) and John XXIII (left) will be made saints, elevating the two most decisive popes of the 20th century to the pantheon of Catholic life and worship. Religion News Service file photos

In a sign of the worldwide devotion for John XXIII, known as "Good Pope John," Francis waived the requirement for a second miracle credited to John XXIII's intercession, with the Vatican's spokesman saying, "no one doubts his virtues."

Francis signed off on a decree recognizing the second miracle attributed to the Polish-born John Paul II, who reigned from 1978 to 2005 , and is credited with globalizing the papacy and playing a key role in the downfall of the communist regimes of Eastern Europe.

John XXIII convened the Second Vatican Council (1962-65) that introduced modernizing reforms in the Catholic Church on issues such as religious freedom, democracy and ecumenism.

“The pope has the power to exempt a (sainthood) cause from the second miracle and this is what happened,” explained the Vatican's chief spokesman, the Rev. Federico Lombardi.

A first miracle had been recognized when John XXIII was beatified and declared “Blessed,” the penultimate step to sainthood, in 2000.

Under normal circumstances, two miracles are needed for sainthood — one to be beatified and a second to be canonized. A miracle is generally a healing from an incurable illness or condition instantaneously, completely and in a way that defies any scientific explanation.

According to Lombardi, the canonization ceremony could be held “within the year.” Most speculation has centered on Dec. 8, the feast of the Immaculate Conception and a holy day of obligation for Catholics.

The Vatican didn't give any official details on the second miracle attributed to John Paul II. Italian press reports described the case of a Costa Rican woman who was instantaneously cured of an aneurysm after praying to the Polish pontiff on May 1, 2011, the day of his beatification.

If this is confirmed, John Paul would become a saint faster than any other in the modern history of the Catholic Church, and only eight years after his death in 2005. He would easily best the record set by Opus Dei founder Josemaria Escriva, who was declared a saint in 2002, 27 years after his death.

While John Paul's sainthood had been on fast-track ever since his death, when millions gathered in Rome calling for “Santo Subito!,” (“Saint now!”), John's cause had been put on hold for years as the reforms of the Second Vatican Council were called into question by conservatives under Benedict XVI.

Francis unexpectedly decided to accelerate John XXIII's sainthood. “He is loved by Catholics, we are in the 50th anniversary of the Council and moreover no one doubts his virtues,” Lombardi explained.

On Friday, Francis also signed off on the beatification of Alvaro del Portillo, the first leader of Opus Dei after the death of Escriva.