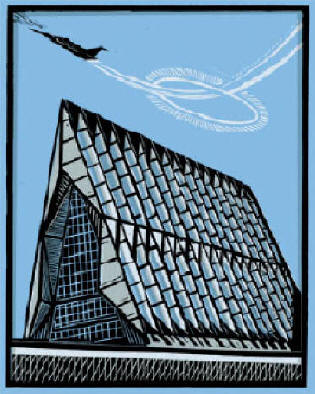 Last week, while I was enjoying a little R&R on the coast of Maine, we reported that religious freedom had come under attack in the military. To defend against the alleged assault, the Armed Services committees of both houses of Congress have approved language to the 2014 Defense Appropriations Act that instructs the Armed Forces to “accommodate the beliefs, actions, and speech” of service members “except in cases of military necessity.”

“That’s like using a meat ax to do brain surgery,” says the American Jewish Committee’s Marc Stern, one of the country’s leading church-state lawyers and as staunch an advocate of religious liberty as lives on God’s green earth.

What the language aims to do is expand the existing accommodation of beliefs to one form of action and speech above all: proselytizing other service members. This is simply the latest campaign of evangelical Protestantism, which has since the 1940s struggled against the military’s desire that religion in the ranks be as inclusive as possible. Not surprisingly, it is being waged by the Family Research Council (FRC) and a coalition all but exclusively composed of evangelical parachurch organizations.

Evangelicals, of course, tend to regard evangelization — the Great Commission — as central to the practice of their faith. And a private soldier should be able to witness his or her faith to another private. But when the drill sergeant or commanding officer tells the private that she will be attending chapel at 0800 hours and hopes to see him there, that bears all the marks of religious coercion. And that’s only the beginning. Consider the complexities involved in providing pastoral counseling to a pregnant noncom who doesn’t want to carry her baby to term where the soldier who got her pregnant believes that abortion is a sin and has asked the chaplain to intervene.

Culture war bludgeons like the FRC’s hyperbolic report (“A Clear and Present Danger”) are the last thing we need in resolving the extremely delicate issues of religion in the military. That’s why the Obama administration quite rightly is threatening to veto the Defense bill if it includes the language in question.