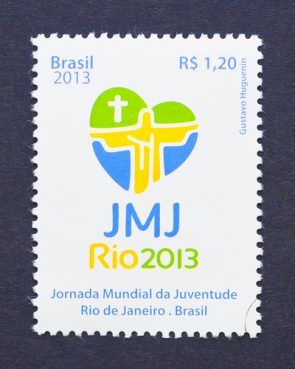 A small explosive device was discovered and safely detonated yesterday at a shrine Pope Francis is scheduled to visit tomorrow as part of his journey to Brazil for World Youth Day. Francis plans to celebrate mass at Our Lady of Aparecida, which honors the Virgin Mary.

More papal security problems when the driver of the pope’s humble Fiat took a wrong turn and put the pontiff in far closer proximity to the delighted masses than his protectors had planned.

John Allen reports on Francis’ gentle knock on Brazil’s door for the National Catholic Reporter, as NPR looks at a a concomitant gathering of Brazilian evangelical Protestants, a growing force in the largely Catholic nation.

Kevin Eckstrom chronicles the Washington visit of that Austrian Roman Catholic priest who advocates women priests and other forbidden things. The Rev. Helmut Schuller wasn’t allowed to speak in any Catholic churches on his American trip, so he talked about his controversial vision — and how Pope Francis might support it – at the National Press Club.

Speaking of controversial priests, the Vatican’s first envoy to Muslim-majority Malaysia is in the hot seat after saying that Christians may use the Arabic word “Allah” to describe God. Angry Malaysian Islamists said the statement shows that he’s trying to convert Muslims to Christianity and that he needs to go back to Rome.

There’s a new heir to the British throne. It’s a boy. He’s third in line. And there’s no name yet. We’ll keep you posted on the christening details.

A judge in North Dakota has issued a temporary injunction against a state law that would ban abortions after six weeks.

“Ugly Churches” are the subject of an ongoing feature at RealClearReligion pointed out to me by my colleague Adelle Banks, who reminds that beauty is in the eye of the beholder.

After a global outcry, a Norwegian woman who told police in Dubai that she had been raped has been pardoned. Relying on an Islamic law code, United Arab Emirates authorities had sentenced her to 16 months in prison for having sex outside marriage, drinking and making false statements.

Meet Russell Moore, “a new face for evangelical Christian activists,” in Bob Smietana’s illuminating and entertaining profile of the new head of the Southern Baptist Convention’s Ethics & Religious Liberty Commission. Moore, he writes, “has Jesus in his heart, Wendell Berry on his bookshelf and Merle Haggard on his iPod.”

A chaplain with lots of the right kind of degrees and the endorsement of his flock is ready to don his Navy uniform and minister. The catch is that he’s a humanist, and the Humanist Society that endorsed him is not on the Navy’s list of 200 or so chaplain-approving groups. Kimberly Winston’s story asks: do you have to believe in God to be a military chaplain?

Here’s a lovely Ramadan reflection from Imam Khalid Latif about being sad during the holiday, and the relationship between sadness and faith.

Religion writer Jeffrey Weiss had enough of the many comments he read about President Obama’s “divisive” and “race-baiting” response to the Trayvon Martin case. So he wrote this commentary, which asks the reader to pretend that the president is not African-American but Jewish.

A measles outbreak – 58 cases among adults and children in ultra-Orthodox Jewish neighborhoods in Brooklyn — has been halted as the city’s public health department works with rabbis to boost vaccination rates.

The other day the boss asked me to cover a story about religion and a horror movie, which would entail watching the horror movie. I flat out refused, which I don’t think I’m supposed to do according to my contract. Then the intern refused, which made me feel a little better. We’re just  . . .  scared. But now Jana Riess writes that a lot of people — religious people – just love to watch zombies and vampires and serial killers . . .

In the genre of horror we are working out our deepest anxieties. Vampires, zombies, and the like are stand-ins for our other fears, the ones we can’t talk about. That means fear of death, of course — but even worse, of being a living corpse who drains those we love.