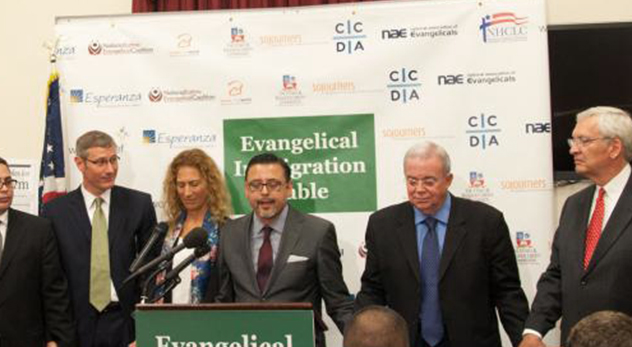 Leaders from the “Evangelical Immigration Table” pray together at an event in Washington, DC. But the effort isn’t convincing some lawmakers – Image courtesy of Christians for Comprehensive Immigration Reform (http://bit.ly/162fmr2)

As evangelical leaders push for immigration reform, they prove yet again that politics makes strange bedfellows.

The typically conservative group is allying with President Obama and congressional Democrats through a broad coalition called the Evangelical Immigration Table (EIT). Supporters of the EIT include Leith Anderson, President of the National Association of Evangelicals, Matthew Staver of Liberty University, Jim Wallis of Sojourners, and more than 100 heads of evangelical denominations, colleges, and organizations. Together, they have endorsed a statement calling for a bipartisan solution that, among other things, respects human dignity, protects the unity of families, secures our national borders, and establishes a pathway toward citizenship for those who desire it.

Many commentators believe this effort may create a tipping point on immigration. Evangelicals are able to speak about the issue in moral terms by using religious language, and as an important part of the conservative base, they can pressure Republican opposition in ways few other groups can.

As William McKenzie of “The Dallas Morning News” writes, “Evangelicals hold the key to re-creating our immigration system.”

Yet despite broad support from such an influential faction of American Christians, the road to immigration reform is still a long one. Though a reform bill passed in the Senate with 68 votes, passage in the House seems less than likely. GOP leaders have publicly criticized the bill, and Speaker Boehner says he won’t pass it without a majority of the Republican caucus. Additionally, he says they will write their own bill rather than accept the Senate’s. In short, it may be a while before an immigration bill becomes law.

As it turns out, the evangelical movement on immigration has been mostly top-down and not bottom-up. It has failed to do the difficult work of convincing and mobilizing (or at least neutralizing) the millions of evangelical churchgoers and voters. As “The New York Times” reports, while “no prominent pastor has spoken out against the immigration (reform) effort … accord has been less broad among the faithful.”

According to a recent poll released by the Public Religion Research Institute (PRRI) and the Brookings Institution, only 56 percent of evangelicals believe that undocumented immigrants currently living in the U.S. should be allowed to become citizens provided they meet certain requirements. That percentage is essentially unchanged since 2006 when Pew reported that 54 percent of evangelicals favored “allowing undocumented immigrants to gain legal status and the possibility of citizenship.”

Perhaps most telling, the PRRI poll reports that 63 percent of evangelicals believe the nation “should make a serious effort to deport all illegal immigrants back to their home countries”—20 percent higher than the national average.

I can guarantee you that I am not the only one paying attention to these polls. Lawmakers are too. They know that the evangelical push for immigration reform has failed to penetrate into the core of the constituency. It’s mostly a grasstops movement of high-level leaders, many whom are unlikely to vote anything other than Republican in future elections regardless of whether Congress moves on immigration.

For years, evangelical organizations have enacted political strategies to gather leaders, affix their names to a statement, and lobby Congress for reform. But such efforts create momentum only insofar as those leaders represent the views of their constituencies.

A good example of this might be the Evangelical Climate Initiative (ECI), a group of hundreds of prominent leaders calling for political action on global warming in 2006. Their statement was signed by notables such as mega-church pastor Rick Warren, Richard Stearns of World Vision, and the presidents of more than 40 evangelical colleges. Though the effort created a media frenzy, it failed to rally average, pew-sitting evangelicals. Polls showed that most evangelicals were not convinced that climate change was man-caused and did not support political action, so many lawmakers ignored the effort.

I support both the ECI and the EIT, but I also recognize their limitations. In a post-modern world where high-profile pastors and religious leaders don’t command the respect and trust they once did, efforts to induce change must animate the masses and not merely cobble together elites. And so it is with immigration.

Pro-reform religious leaders must find a way to educate and innervate the everyday faithful, not just lawmakers. They must convince their brothers and sisters of the connections between immigration reform and the Biblical commands to “welcome the stranger” and “care for the least of these.” If they refuse or fail to do so, these leaders who have worked so hard on such an important issue will find themselves sitting around the immigration table empty-handed.