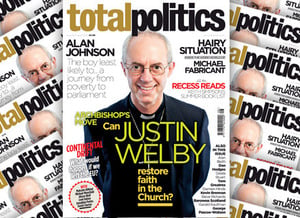 CANTERBURY, England (RNS) Archbishop of Canterbury Justin Welby said he was embarrassed and irritated following revelations that the Church of England has invested millions of pounds in a company that financially backs England’s leading payday lending company, Wonga.

The cover of Total Politics photo

Welby told the BBC:  “We must find out why this happened and then make sure that it never happens again."

The Financial Times broke the news that the Church of England invested several million pounds in Accel Partners, the U.S. venture capital company that led to the launch of Wonga, which dominates the 2 billion pound payday lending market in England.  Wonga charges annual percentage rates of more than 5,000 percent.

A spokesperson for Lambeth Palace, Welby’s London home, said: "We are grateful to the Financial Times for pointing out this serious inconsistency of which we were unaware. We will be asking the assets committee of the Church Commissioners to investigate how this has occurred."

The Church of England’s investment portfolio is estimated at 5.5 billion pounds, or $8.4 billion. Church Commissioners oversee investments and the church’s ethics explicitly bans companies involved in payday lending. There are no restrictions on the annual percentage rates payday loan companies can charge.

The paper’s revelations have stunned not only the archbishop but also the Church of England’s public relations department, which knew nothing about the deal.

Yesterday, the papers were full of stories about how Welby had held a meeting with the founder of Wonga, Errol Damelin.

News of the encounter between the archbishop and the payday-lending boss, who was brought up in South Africa and now lives in England, came after Welby gave an interview to Total Politics magazine.

He told the magazine the Church of England planned to throw its financial weight behind credit unions as an alternative to Wonga.

Welby, who has served on the parliamentary Banking Standards Commission, wants government-recognized credit unions to be able to have bases in many of the Church of England's 16,000 churches. The credit unions charge much lower annual percentage rates than Wonga; Welby also offered volunteers to help run them. 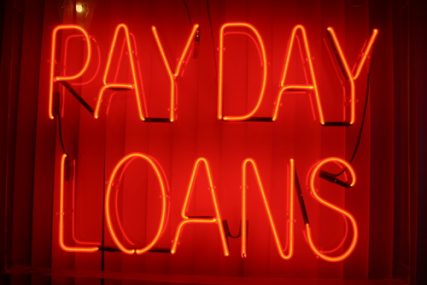 He also wants to see more Britons join credit unions (where annual percentage rates are in the region of 80 to 90 percent), and noted that in Ireland, 70 percent of the population belongs to them but only 1 percent in Britain. The credit union movement started in Germany in the 19th century and soon spread across Europe and the U.S.

This year, the British government pledged to spend 38 million pounds to support the sector, but small credit unions which lend money on a short term basis to poor people often lack expertise and fail to handle loan applications quickly, unlike the personnel at Wonga, which is respected and quick.

Welby said that the Church of England would consider setting up its own credit unions. Asked what the annual percentage rate needed to be to make them profitable he said, ”about 70 to 80 percent.”

Welby, who heads the 80 million-strong worldwide Anglican communion, said he agreed that was still high but better than what Wonga and others charged.

Related Posts
By Amy Butler
How to celebrate Christmas: Change the world
By Catherine Pepinster
Chief rabbi's attack on anti-Semitism keys reckoning over faith in UK election
By Emily McFarlan Miller
N.T. Wright explains the world of the New Testament in new book
By Catherine Pepinster
Boy's removal from church service spurs debate in UK on welcoming those with autism
By Fredrick Nzwili
Citing inclusion of LGBT clerics, Anglican bishops in Africa to shun Lambeth Conference