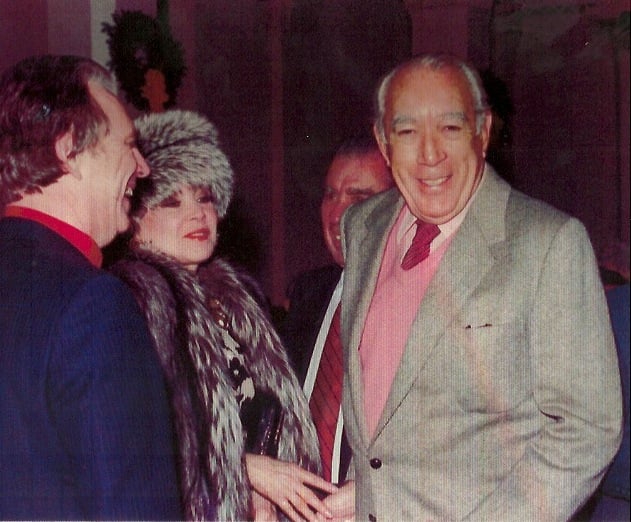 David James Randolph who marched on Washington in 1963 cheers marchers for Trayvon Martin in 2013 as part of "The Great Parade" in his new book with this title. This is the story of one who marched from the Great Depression of the 20th Century to the Peace Marches of the 21st by way of Washington, New York and the San Francisco Bay Area where he now lives.

Dr. Randolph, pictured here (l) with journalist Cindy Adams (c) and actor Anthony Quinn tells of his experience with allies to share discoveries that show ways to march forward. The years from 2003 and the Iraq War to 2013 and the nullification of the Voting Rights Act may have been a tragic decade but this need not become a tragic century. He shows the relevance of the Biblical story of David to transform history through the “David Difference” dynamic, anticipating the New Yorker writer Malcolm Gladwell's new book  “David and Goliath.”

This member of the Silent Generation speaks out of his personal experience as well as public activities to tell how a boy who rode his bicycle to  preach in a country church in Maryland went on to become Senior Minister of a congregation on  Park Avenue in New York City, serving the rich and famous and poor and unknown alike. Along the way, he marched with Dr. Martin Luther King, Jr. and others to become a volunteer in a local church and president of a university in California because he heard a different drum of faith. The good news is that this is a Golden Age of human history. The bad news is that it's coming to a halt after 9/11 2001 and the War in Iraq. The big challenge is how to avert disaster and continue the Great Parade to justice and peace in the light of resources like those offered here.

About the author: David James Randolph, PhD, is an educator and spiritual leader known as a speaker and writer who lives and works in the San Francisco Bay Area of California. He is the Host of the New Way Media and Art Festival, one of the first festivals to feature New Media.  His work has been featured on the NBC "Today Show," CBS "In Our Time," the National Radio Pulpit on NBC, The New York Times, and numerous other media. His life and work bridge church and society and the 20th and 21st Centuries.  He is the author of numerous books and articles, including the "revolutionary" The Renewal of Preaching.

“The Great Parade” is available in print from Amazon.com plus other books by Randolph. See http://newwaymediafest.blogspot.com.